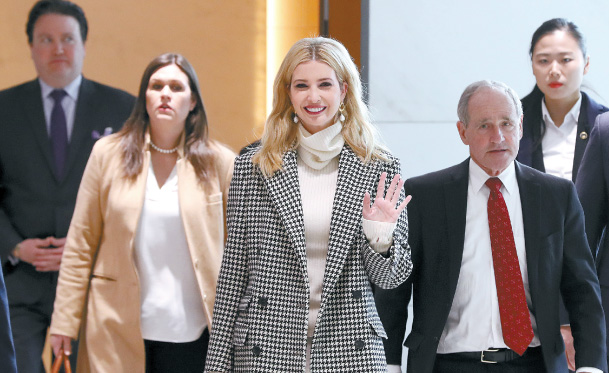 Ivanka Trump, U.S. President Donald Trump’s daughter and adviser, waves to the crowd after arriving at Incheon International Airport Friday to lead a U.S. delegation to the closing ceremony of the PyeongChang Winter Olympics in Gangwon. [YONHAP]

President Moon Jae-in hosted Friday a dinner for Ivanka Trump, the elder daughter of U.S. President Donald Trump and a presidential assistant and adviser, at the Blue House as she began a four-day trip to Korea to attend the closing ceremony of the Winter Olympic Games in Pyeongchang County, Gangwon.

The dinner, hosted at the Sangchunjae reception house at the Blue House, was centered on traditional Korean cuisine, including bibimbap, or “mixed rice,” to symbolize harmony. Korean and American wines were served to show friendship and unity, the Blue House said. The food was also kosher.

A concert of Korean and American music was also performed.

“We are very excited to attend the 2018 Winter Olympic Games to cheer for Team USA and to reaffirm our strong and enduring commitment with the people of the Republic of Korea,” Trump said upon arrival at the airport.

In addition to the dinner at the Blue House, the delegation will see some Olympic games over the weekend and attend the closing ceremony on Sunday.

Although the White House made clear that Trump has no plan to contact any North Koreans during her visit, at least one member of her delegation is acquainted with the controversial North Korean official who will head the North Korean delegation to the closing ceremony, Kim Yong-chol. Allison Hooker, an official on the National Security Council (NSC) in charge of Korean affairs, accompanied Trump.

Hooker, an East Asia and Pacific affairs analyst with the U.S. State Department Bureau of Intelligence and Research, was appointed director for Korean affairs at the NSC in 2014. When James Clapper, then-director of National Intelligence, visited the North as an envoy of U.S. President Barack Obama in November 2014 to negotiate the release of two Americans held prisoner, Hooker accompanied him.

Clapper’s counterpart in the negotiations over the detained Americans was Kim, who headed the North Korean Reconnaissance General Bureau at the time.

When the White House initially released the names of the delegates to travel with Trump, Hooker was not included.

The Blue House has said it has no intention of arranging contact between the Trump and Kim’s delegations following the abrupt breakdown of a planned talk between U.S. Vice President Mike Pence and North Korean leader Kim Jong-un’s younger sister, Kim Yo-jong, on Feb. 10 following the opening ceremony of the Games. The North pulled out of the meeting just two hours before it was to start.

Speculation remains that Hooker may contact the North Korean delegates during the visit. A senior Blue House official said Friday that it would have been unnatural for Ivanka Trump to meet Kim Yong-chol. “But Moon’s message that the North and the United States must talk in the earliest future will remain unchanged,” he said.

A plan to step up the sanctions was announced when Vice President Pence visited Japan before coming to Korea for the opening of the Olympics.