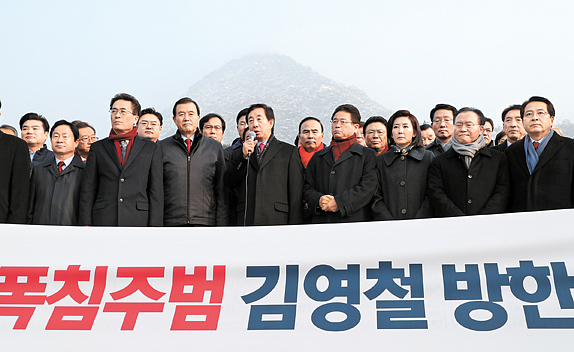 Lawmakers of the main opposition Liberty Korea Party, including floor leader Kim Sung-tae, hold a press conference protesting North Korea sending to the closing ceremony of the PyeongChang Winter Olympics on Sunday Kim Yong-chol, a vice chairman of the North’s Central Committee of the Workers’ Party and director of the United Front Department, in front of the Blue House in central Seoul Friday. [YONHAP]

The Moon Jae-in administration is fighting snowballing criticism that it has agreed to welcome North Korea’s Kim Yong-chol to the closing ceremony of the Winter Olympics despite his reputation of having masterminded the 2010 torpedoing of the South’s Cheonan warship that killed 46 sailors.

The Ministry of Unification released a six-page press statement Friday morning justifying the upcoming visit by Kim, a vice chairman of the North’s Central Committee of the Workers’ Party and director of the United Front Department, the committee’s intelligence arm. Pyongyang informed Seoul on Thursday that Kim would lead the delegation for the PyeongChang Winter Olympics’ closing ceremony in Gangwon on Sunday, prompting protests from families of the Cheonan victims and conservative politicians.

Kim, who headed the North Korean Army’s Reconnaissance General Bureau since its establishment in 2009, was accused by the administrations of Lee Myung-bak and Park Geun-hye of having orchestrated various armed provocations against the South. The bureau was suspected of having masterminded an attempted assassination of Hwang Jang-yop, a former Workers’ Party secretary and the highest North Korean to defect to the South, in 2009; the sinking of the Cheonan; the shelling of Yeonpyeong Island in 2010, which killed four people; and the planting of landmines near a South Korean military post inside the Demilitarized Zone in 2015 that severely wounded two soldiers.

Kim was appointed director of the United Front Department, which oversees all intelligence operations and negotiations, after Kim Yang-gon’s death in 2015.

Kim is blacklisted by Seoul and Washington due to his links to the regime’s weapons development program. Seoul temporarily lifted its ban on him for the visit, the Blue House said Thursday.

Despite Kim’s reputation, the Moon administration, including the Blue House and the Unification Ministry, insisted that a joint investigation by a civilian and military panel never specifically identified him as the main culprit in the Cheonan’s sinking. The ministry said the investigation outcome announced in May 2010 never specified which organ or figure in the North was responsible for the attack.

The ministry also said the U.S. sanctions on Kim imposed in August 2010 were not directly linked to the Cheonan’s sinking.

The ministry also said Kim had attended inter-Korean military talks as the North’s chief delegate in October 2014 but the Park administration never raised his suspected link to the Cheonan’s sinking.

Asked if the government will allow Kim’s visit despite protests, the ministry said, “We expect the people to understand our decision for the sake of establishing peace on the Korean Peninsula.”

The National Intelligence Service (NIS) took a similar stance. The National Assembly’s Intelligence Committee had a meeting with Kim Sang-gyun, second deputy director of the NIS, and listened to the main spy agency’s position.

“It is possible to suspect that he was behind the Cheonan’s sinking, but the South cannot pinpoint accurately that he had gave the order,” the NIS deputy director was quoted as saying by Rep. Kang Seok-ho of the Liberty Korea Party (LKP), chairman of the committee.

“Kim Yong-chol is the highest official in charge of inter-Korean negotiations,” Kim Sang-gyun was also quoted as saying. “We decided to accept him because he is the best person to actually talk about easing military tensions, advancing inter-Korean relations and denuclearization.”

The main opposition LKP fiercely criticized the Moon administration. Chairman Hong Joon-pyo is scheduled to pay a visit to the memorial to the 46 sailors killed in the attack in Pyeongtaek, Gyeonggi.

LKP lawmakers held a press conference near the Blue House to condemn Moon’s decision to allow Kim to visit. After reading a statement, they delivered it to the office of the senior presidential secretary for political affairs.

“Kim Yong-chul is the main culprit who attacked the Republic of Korea,” said the LKP statement, read by party floor leader Kim Sung-tae.

“We must never allow the North Korean dictatorship’s attempt to neutralize international sanctions and divide the South,” Rep. Kim said. “It is a serious crisis that President Moon allowed such a deceptive strategy and it will be remembered as an unforgivable sin before the people and history.”

Rep. Kim also dismissed the argument by the ruling Democratic Party that the LKP, when it was the ruling party under the Park administration, didn’t opposed Kim Yong-chol’s participation in inter-Korean talks in 2014. “Those were inter-Korean military talks at Panmunjom,” he said. “Setting foot in the South for a world sports event for peace is completely different.”

The Democratic Party said Friday that the LKP is politicizing a national security issue. “When it was the ruling party, it highly supported the talks in 2014 in which Kim participated, but now it is fiercely trying to stop Kim,” said Rep. Woo Won-shik, floor leader of the ruling party. “If it wanted to criticize Kim, it should have done so back then.”

“I think first, we would hope that he would take the opportunity to go to that memorial [for the Cheonan], to go to the memorial and see what he is believed to have been responsible for,” Heather Nauert, spokeswoman of the State Department, said Thursday.

The Cheonan Memorial in Pyeongtaek, Gyeonggi, honors the 46 sailors killed in the torpedo attack attributed to the North. Located in the Second Fleet Command’s naval base, the memorial exhibits the wreckage of the ship. U.S. Vice President Mike Pence visited the memorial earlier this month, when he visited Korea to attend the opening ceremony of the Olympics.