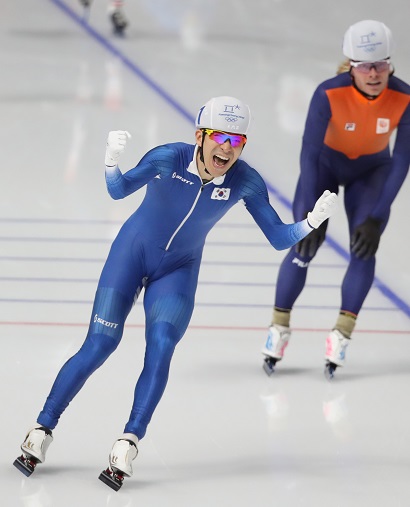 Lee Seung-hoon, left, celebrates after winning the men's mass start race at the Gangneung Oval in Gangwon on Saturday. [YONHAP]

Lee Seung-hoon took home another medal on Saturday, winning gold in the men’s mass start race at the Gangneung Oval in Gangwon.

Racing in the bottom of the group, top-ranked Lee started sprinting in the final lap. Though it is an individual race, Chung Jae-won and Lee showed great teamwork. For the majority of the race Chung set the pace for Lee. Then, with less than two laps remaining, Chung slowed down, allowing Lee to speed up for a thrilling come-from-behind victory.

Lee has now taken home five medals from the past three Olympics, more than any other Asian athlete has ever won at the Winter Olympics.

Prior to the men’s final, Kim Bo-reum won silver in the women’s mass start, finishing behind Nana Takagi of Japan. Kim raced at the back of the group until the last two laps, where she abruptly shot to the front to take the lead.

In her explosive spurt in the final 200 meters, Kim was able to surpass Irene Schouten of the Netherlands but was behind of Takagi by a blade. By finishing second in the final race, Kim received 40 points.

Team Korea also found success on snow on Saturday. Alpine snowboarder Lee Sang-ho took silver in the men's parallel giant slalom, becoming the first Asian man to medal in an Olympic alpine snowboarding event and the first Korean to win a medal at a snow event.

As of 10:30 p.m. on Saturday Korea had tied with Switzerland in seventh place on the medal table with five gold, six silver and four bronze. Korea is guaranteed to win at least one more medal at PyeongChang.