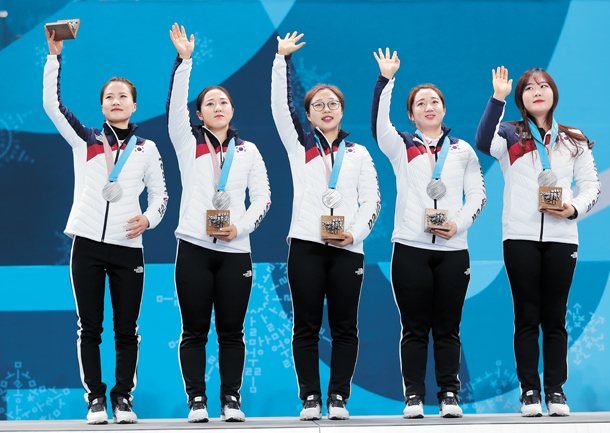 From left: Kim Eun-jung, Kim Kyeong-ae, Kim Seon-yeong, Kim Yeong-mi and Kim Cho-hi wave to the fans after winning silver in women’s curling at the Gangneung Curling Centre in Gangwon on Sunday. [YONHAP]

Korea may have missed out on a gold medal in the women’s curling final at the Gangneung Curling Centre in Gangwon on Sunday morning, but the dynamic Team Kim have won the adoration of fans across the country and around the world after they unexpectedly swept through the competition with steely determination and impeccable teamwork.

Starting as the hammer - the curling term for the advantageous final shot of each round, or end - Korea took the lead with a point in the first end. After a blank end in the second, Sweden kept the hammer and added two points in the third. Though Korea had the hammer, Team Kim allowed Sweden to steal in the fourth, and the score reached 4-1 to Sweden by the end of the fifth.

Korea started to push back in the sixth, taking a point to bring the score to 4-2, but their comeback didn’t last long. Sweden responded with a blistering seventh end, taking three points and leaving Team Kim five points behind as the game neared its end.

Korea added a point in the eighth, but as Sweden added another in the ninth, Team Kim conceded at the start of the tenth, concluding the game at 8-3 and securing Sweden the gold medal.

“We won silver, the first ever in Korea’s curling history,” Kim Eun-jung said. “There were a lot of challenges to get here. We played together and we were able to make history with the help of Professor Kim Kyung-doo and the North Gyeongsang Sports Council. Sweden showed the perfect game in the final. They deserve to be in that position.”

Despite finishing in second place, Team Kim’s silver medal is still considered one of the biggest upsets of this year’s Winter Games. For Korea, a country that has only once qualified for the Olympics in any curling event - men’s, women’s or mixed doubles - to make it out the round robin stage was completely unexpected. The team’s achievement has completely changed the face of the sport in a country that until last week was almost completely unaware of its existence.

“There have been a number of times when we have lost at the finals,” Kim Eun-jung said. “We always said to each other that we wanted to win at least silver in big tournaments. It was really hard because we always wanted to become a top-class team but we would just miss out.”

As the team has finished in second place at so many tournaments, Kim Eun-jung joked that she has considered changing her name to “Kim Geum-jung” to give the team a better chance. In Korea, “eun” means silver and “geum” means gold.

Kim Eun-jung’s emphatic shouts of “Yeong-mi” - the team’s lead - have already become a globally recognizable catchphrase and the skip’s hairstyle has also started to take off, with children across Korea opting for her signature front plait with ponytail.

Team Kim also turned heads for their skill with a curling stone. The Korean squad pulled off some remarkable moves to comfortably beat the five top curling nations in the world - Canada, the United States, Sweden, the United Kingdom and the Olympic Athletes from Russia - in the round robin stage.

While Team Kim has undoubtedly noticed the packed stands and media attention that they’ve been getting, they are still unaware of the extent of their international fame. When they entered the Athletes’ Village they chose to leave their phones behind to help them focus on the tournament.

“We still haven’t gotten our phones back,” Kim Yeong-mi said. “We somewhat knew [about our popularity] when the volunteers and the fans started to cheer for us.”

“We could tell that the cheers have gotten a lot louder compared to our first game,” said skip Kim Eun-jung. “But we didn’t know that we’ve become that famous. We’ll find out once we check the internet. We have had cheers and been sent notes. But more than anything, we’re happy that there are a lot of fans watching Korean curling.”

Sweden, who started the competition as the fifth-ranked team, has a far more impressive Olympic record. After winning gold at the 2010 Vancouver Games and silver at the 2014 Sochi Games, Sweden was considered a favorite to take the top spot this year. In the round robin stages they won seven of their nine games, losing to Korea and Japan in two incredibly tight games.

Team Kim’s silver medal is not only Korea’s first-ever Olympic medal in curling, but the first time that a Korean team has reached the final in any international curling championship. Korea has twice reached the world championship final in wheelchair curling, in 2008 and 2012.