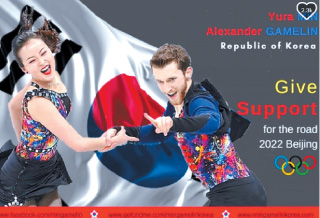 Korea’s ice dance pair, Min Yu-ra and Alexander Gamelin, has won the love of fans at the PyeongChang Olympics. Though the pair has yet to find an official sponsor or management company to give them necessary funding, an increasing number of fans are donating to the pair on its online fundraising page.

Min and Gamelin have been running a personal fundraising platform since December 2016 called the “Min Gamelin Korea Athlete Fund” (https://www.gofundme.com/mingamelinkorea). The skaters had an initial goal of $50,000, but as they got more than their set goal during the Olympics, they increased their target to $100,000, then to $200,000. As of Sunday, they have received over $102,000 for the 2018-19 competition season.

“Your gift means you are sharing our journey, passion and pride in representing South Korea successfully on the world stage,” wrote the pair. “We are honored by your support as we skate forward for Korea on the road to the 2022 Beijing Winter Olympics.”

Being in a tight financial situation, Min and Gamelin started to budget for the 2022 Olympics early. The pair says it needs roughly $200,000 a year for training and competition expenses.

“We do receive a small stipend annually,” wrote the pair, “but we must raise a good portion of these funds ourselves each year.”

Min is a Korean-American who was born in California. She started off in single skating before venturing into ice dancing in 2011 to prepare for PyeongChang. Though she had several partners, she struggled to find a lasting one to represent Korea for the 2018 Winter Games.

In the midst of her search, Min met Gamelin, who was also looking for a partner after his twin sister and former ice dance partner retired.
Min and Gamelin became familiar with one another as both received coaching under Russia’s Igor Shpilband. Naturally, they grew close and decided to represent Korea, which has not competed in pairs’ ice dancing for 16 years in the Olympics.

Under the regulations of the International Skating Union (ISU), two skaters who hold different citizenships can compete as a pair in an ISU competition.

But for the Olympics, both partners in a pair must hold the same citizenship.

Min, who already held dual citizenship in Korea and the United States, was eligible to compete for Korea, but Gamelin, who was born in Boston, had to become naturalized to represent the host nation. Through a special naturalization process, Gamelin attained his Korean citizenship last July, becoming a dual citizen.

Though the pair didn’t receive a lot of media attention, Min started gaining popularity before the opening ceremony for the Olympics for her fun personality.

Dancing to an old Korean pop song, Min flaunted her moves during the welcome ceremony for Korean athletes at the Gangneung Olympic Village in Gangwon on Feb. 7, piquing public interest. Her fame rose further with her wardrobe malfunction during an ice dance short event on Feb. 11, when her costume became unhooked seconds into her performance. But Min laughed it off and said, “I promise to sew myself in for the individual event.”

Her reaction earned her points with some fans, which came in handy for the pair’s fundraising.

Though they placed 18th out of 20 pairs at their free dance event on Feb. 20, Min and Gamelin moved Koreans with their performance to the Korean folk song “Arirang” while wearing matching hanbok (traditional Korean clothing).

“My deepest thanks for using ‘Arirang’ as your song for the whole world to hear,” wrote one supporter. “Let’s meet again in Beijing.”