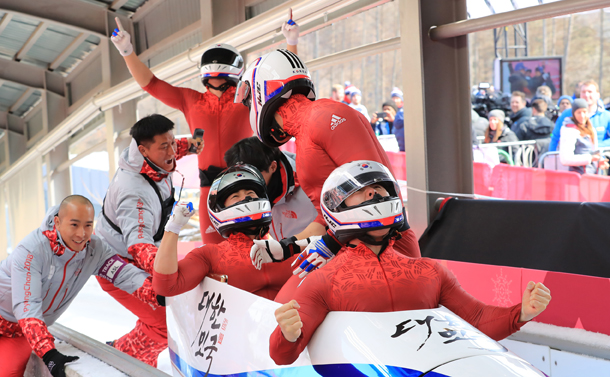 Racing second-last in the fourth heat, Korea, led by pilot Won Yun-jong, recorded a race time of 3 minutes and 16.38 seconds was good enough to win silver, tying the record with Germany, led by pilot Nico Walther. The other German sled, led by pilot Francesco Friedrich, won gold, finishing 0.53 seconds ahead of Korea.

Korea’s four-man team became the first Asian sled ever to medal in bobsled at the Winter Games. Unlike Yun Sung-bin, who won gold in men’s skeleton, fans weren’t expecting the win as the Korean team is ranked 50th in the world and has only had one top ten finish this season.

However, the team got off to a great start, setting a track record time of 48.65 seconds in their first heat. Their record was quickly reset by Germany’s team Friedrich as they reset the track record. Korea kept their position in second throughout the four runs over two days.

Though they didn’t achieve their goal of 8 gold, 4 silver and 8 bronze, Korea set the record for the most number of medals the country has ever won at the Winter Olympics.