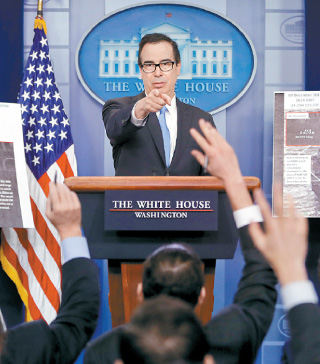 Washington revealed its latest sweeping sanctions on North Korea on Friday, targeting 27 entities, 28 vessels and one individual. U.S. President Donald Trump described the package as its “heaviest” measures to isolate the regime to date.

The new unilateral sanctions further the United States’ maximum pressure campaign on the North and were revealed as Ivanka Trump, the president’s daughter and senior adviser, leads an American delegation on a trip to South Korea for the closing ceremony of the PyeongChang Winter Olympic Games in Gangwon on Sunday.

“We imposed today the heaviest sanctions ever imposed on a country before,” said President Trump in an address to conservative activists in Maryland. “And frankly, hopefully, something positive can happen.”

If the sanctions fail to bring about some change regarding the situation with the North, Trump warned of a possible tougher “phase two,” without elaborating further.

“If the sanctions don’t work, we’ll have to go phase two,” said Trump in a joint press conference with Australian Prime Minister Malcolm Turnbull. “Phase two may be a very rough thing. It may be very, very unfortunate for the world. But hopefully the sanctions will work.”

The U.S. Treasury, State Department and Coast Guard also issued a global advisory alert “to put everyone on notice of North Korea’s illicit maritime tactics and underscore the significant sanctions risk of engaging in maritime business with North Korea,” according to Mnuchin.

Washington is “fully committed to shutting down those who engage in” illicit trade with North Korea, said Mnuchin, adding that President Trump will leverage the United States’ economic strength so that “any company that chooses to help North Korea fund its nuclear and ballistic missile programs will not be allowed to do business with anyone in the United States.”

Included among the 27 entities blacklisted by the OFAC are nine international shipping companies based in China, Hong Kong, Singapore and Panama accused of enabling North Korea’s export of coal or engaging in ship-to-ship transfers of refined petroleum products with North Korean vessels, which are prohibited under the UN Security Council sanctions.

They include Weihai World-Shipping Freight and Shanghai Dongfeng Shipping, both based in China, the Panama-based M.T. Koti Corporation and the Singaporean Yuk Tung Energy Private Limited.

The Chinese Foreign Ministry on Saturday protested the blacklisting of its companies.

“The Chinese government has been comprehensively and strictly implementing the Security Council resolutions on the DPRK and fulfilling its international obligations, and never allows any Chinese citizen or company to engage in activities in violation of the Security Council resolutions,” said Geng Shuang, spokesperson of the ministry in a statement.

He added, “The Chinese side firmly opposes the US imposing unilateral sanctions and “long-arm jurisdiction” on Chinese entities or individuals in accordance with its domestic laws. We have lodged stern representations with the US side over this, urging it to immediately stop such wrongdoings so as not to undermine bilateral cooperation on the relevant area.”

The OFAC also blacklisted Taiwanese citizen Tsang Yung Yuan, who it said has a history of other sanctions-evasion activities, for coordinating North Korean coal exports with a Russia-based North Korean broker.

According to the OFAC, Kingly Won was involved in a $1 million oil deal last year with Independent Petroleum Company, a Russian entity that was sanctioned by the OFAC for operating in the North Korean energy industry.

The measures block assets held by the companies and individuals in the United States and prohibit U.S. citizens from dealing with them.

The 28 vessels that were blacklisted are located, registered, or flagged in North Korea, China, Singapore, Taiwan, Hong Kong, Marshall Islands, Tanzania, Panama and the Comoros.

Mnuchin said the vessels are “virtually all the ships they’re using at this moment in time.”

He added, “We’re going to do everything to stop these ship-to-ship transfers,” but stopped short of suggesting that this could lead to a naval blockade of North Korea.

“We’re not going to announce in advance anything that we may do in the future on military actions,” said Mnuchin. “We are monitoring.”

The latest U.S. sanctions on the North come after Ivanka Trump landed in South Korea Friday and met with President Moon Jae-in at the Blue House, reaffirming Washington’s commitment to its “maximum pressure campaign to ensure that the Korean Peninsula is denuclearized.” She also briefed Moon on the latest sanctions, according to the White House.

The sanctions also come amid the latest detente between the two Koreas during the PyeongChang Olympics. The North sent a high-level delegation led by Kim Yong-chol, a vice chairman of the North’s Central Committee of the Workers’ Party, to attend the closing ceremony of the Winter Games.

“The latest sanctions are the strongest we have had on North Korea,” White House Press Secretary Sarah Huckabee Sanders told reporters on Saturday at the Team USA House in the Yongpyong Ski Resort in Gangwon. “We are going to be continuing in that form. Hopefully we’ll see a change on behalf of these North Koreans to start to denuclearize the peninsula - that’s where our focus is.”

But she did not elaborate on the details of what a “phase two” forecast by President Trump was.

“I can tell you that the president won’t make the mistakes the past administration has, and be soft or weak,” said Sanders. “He’s going to continue to be strong and continue to put maximum pressure on North Korea.”

She added the United States is going to ask all its allies and partners “to step up and do more as well and join us in that effort.”

When asked if Ivanka Trump will be seated near or meeting with Pyongyang officials, Sanders replied, “We have no planned meetings or interactions with the North Koreans.”

“Nobody wants military action,” said U.S. Senator Jim Risch, a Republican of Idaho, during the press conference with Sanders. “But the president has said that he is committed to seeing that the North is not marrying a nuclear tip to an ICBM [intercontinental ballistic missile]. When he says that, people should listen to him.”

He also addressed the possibility of a naval blockade on North Korea, which the isolationist regime has previously said would be considered an act of war.

“There have been a number of options presented to the president,” said Risch, the chairman of the Senate Foreign Relations Subcommittee on the Near East, South Asia, Central Asia and Counterterrorism. “Unless things change dramatically, he’s going to have to make some tough decisions…We hope that doesn’t happen. Nobody wants this to go any further than it already is. But we are where we are. And that’s the reality.”

Risch said that the delegation had a “good meeting with President Moon” the previous night. “We again underscored the close relationship between our two countries. There is no daylight between us.”

“Talking is good. Dialogue is good,” pointed out Risch on inter-Korean engagement. “People do better when they do have dialogue. The president has said so.”

He also lauded South Korea’s achievements, calling it “a role model for the rest of the world” in how to establish democracy, the rule of law, respect for human rights and a free market system that produces a robust economy.

Sanders and Risch accompanied Ivanka Trump as a part of the U.S. delegation to cheer on American Olympic athletes and attend the closing ceremony on Sunday. Trump on Saturday viewed the men’s big air snowboard finals with the Korean first lady, Kim Jung-sook, and Foreign Minister Kang Kyung-wha.