Cancer of the skating world

Cancer of the skating world 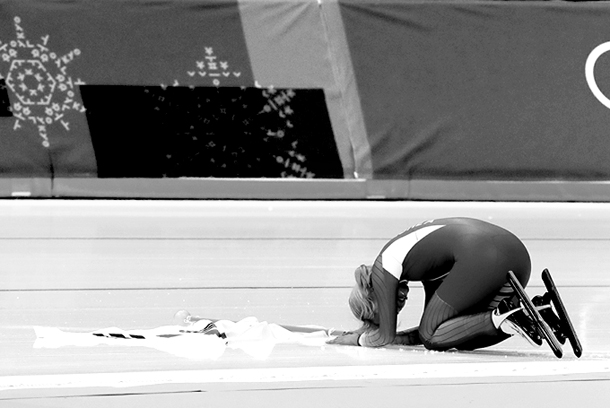 “All I could say was ‘sorry,’” Kim Bo-reum said, unable to even smile after winning a silver medal at the women’s mass start speed skating at the 2018 PyeongChang Winter Olympics in Gangwon on Feb. 24. She rolled her eyes as if afraid of something beyond the camera, then kneeled and bowed to the crowd.

After the women’s team pursuit event on Feb. 19, Kim has been a target of criticism. Many fans were outraged when she blamed one of her teammates in an interview for preventing them from making to the semifinal. As of Feb. 26, more than 600,000 people signed a Blue House petition calling for Kim and Park Ji-wu to be expelled from the national team. In the interview after winning the silver medal, Kim seemed to be conscious of the harsh eyes of those 600,000 people. Knowing that hundreds of thousands of people are rejecting her as a national team member, she went for the remaining event and stood before the crowd and cameras because there is no place for athletes to hide.

But the Korea Skating Union is nowhere to be found. From the administrative mistake that jeopardized Noh Seon-young’s Olympic appearance to a couch’s assault of Shim Seok-hee to union executives’ controversial visit to the Athletes’ Village to the “bully” in the team pursuit team, the union did not take a stance. The crack on the ice had no time to be mended. Officials and executives of the Skating Union hid behind the athletes.

The Korean skaters finished the final skating events with gold and silver medals. While the athletes who won medals deserve celebration, the medals should not be shields for the long-standing, ill practices of the Skating Union. Some cynically say that Kim Bo-reum was “released on a silver-medal pardon,” but the Skating Union must not be pardoned. The Blue House petition seeks an investigation and strict punishment for the Skating Union’s practices. As time passes, some argue that a witch hunt for individual athletes is not desirable. Now the criticism of Kim took an absurd turn. Some make “Kim versus Noh” comments using Noh Seon-young’s interview where she raised an allegation that Lee Seung-hoon, Jeong Jae-won and Kim Bo-reum had received preferential treatment during training. Some say Kim was a medal favorite and therefore deserved special treatment.

In the Olympics, we celebrate Korean athletes winning medals. However, winning medals is not as important as sportsmanship or the Olympic spirit. We may not see immediate results, but the cancer must be excised. What would Koreans say if you ask them whether the Korea Skating Union needs an operation? More people than the 600,000 who called for Kim’s expulsion would agree.

*The author is a sports news editor of the JoongAng Ilbo.

Will Beijing save Evergrande?