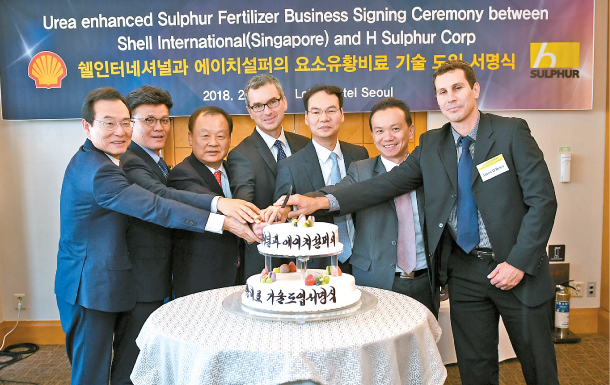 H Sulphur, a Korean producer of sulfur-based fertilizer, signed a licensing agreement with Shell Sulphur Solutions on Monday to use the energy company’s technology to produce a mixed fertilizer with higher urea content.

The fertilizer that H Sulphur hopes to produce will contain 75 percent sulfur and 25 percent urea. Most sulfur fertilizers on the market currently contain more than 90 percent sulfur, according to H Sulphur. Shell’s technology will allow the company to create the sulfur-urea mix through a chemical reaction.

Most farmers spray sulfur and urea separately during a crop cycle. The urea-enhanced fertilizer will allow farmers to spray just one fertilizer, reducing the burden greatly, the company said.

H Sulphur plans to call the new fertilizer Super S and start production from the end of this year at the earliest. The company’s plant in Ulsan is currently being remodeled to implement Shell’s technology in the manufacturing process.

The company said the first phase of remodeling should be complete by the last day of this year. Yoo said H Sulphur hopes to export 200,000 tons of the new fertilizer to global markets over the next five years.

H Sulphur exports to several markets including Australia and New Zealand. In Brazil, the company has over 50 percent market share, according to company figures.