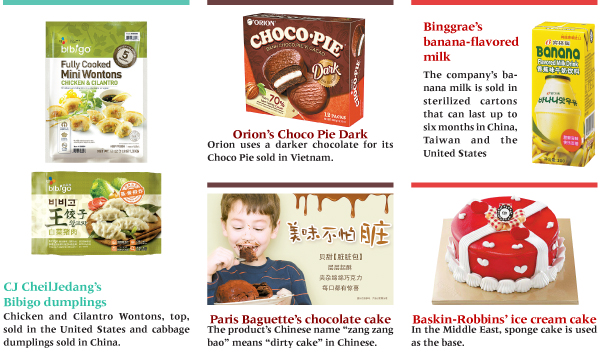 Bibigo is one of CJ CheilJedang’s best-selling food products. Their frozen dumplings have been exported to markets around the world, where they are sold in flavors unavailable in Korea, including chicken and cilantro wontons in the United States, cabbage and corn jiaozi in China and meaty pelmenis in Russia.

In Korea, the dumplings are typically made with pork and chives. The U.S. version is based on Americans’ preference for chicken over pork and familiarity with coriander. Two of Bibigo’s products, Chicken and Cilantro Wontons and Mini Chicken, helped pull up Bibigo’s sales in the U.S. market by 70 percent from 2016 to 177 billion won ($164.6 million) last year.

Bibigo’s market share for frozen dumplings has now surpassed 12 percent, making it the second year that Bibigo has placed No. 1 in the sector, ahead of Ling Ling, which had maintained the spot for 25 years until 2016.

Foreign markets offer bountiful opportunities for Korean food makers, but the decision to export involves complex considerations of localization and marketing strategies. The difficulty is finding a balance between maintaining the original product’s core identity and adapting to the local market’s cuisine. Some companies opt to modify flavors and change their packaging. For Bibigo, that means offering more vegetarian options in China, while in Russia, adding more meat is the way to go.

“That a well-made product [in Korea] will taste good for other consumers outside the country is a belief very much centered on the manufacturer,” warned Choi Ja-eun, CJ CheilJedang’s senior executive for frozen food marketing. “Without a localization strategy, it’s impossible to make that product stay in the foreign market as part of their food culture.”

Last September, Orion, one of Korea’s top manufacturers of snacks, began selling its famous Choco Pies in Vietnam. But rather than using milk chocolate, the exported version contains dark chocolate to fit the Vietnamese palate. The company said the localized variation was developed by its Vietnamese office.

Paris Baguette, a bakery chain, developed a new product for the Chinese market called “zang zang bao,” literally “dirty bread” in Chinese. The pastry, covered in chocolate powder, derives its name from how the mouth and hands get messy while eating it. A similar product became popular among Chinese bloggers last year, leading Paris Baguette to follow suit. Branches in China are selling more than 100 of the pastries each day, and zang zang bao alone now generates 7 percent of Paris Baguette’s sales in China.

Binggrae’s best-selling Banana Milk, too, went through a makeover in other markets. Instead of the iconic container inspired by traditional Korean jars, the exported versions are packaged in sterilized cartons. The company initially exported a small batch in the original container, but this method limited distribution to large department stores because of their short expiration date. The sterilized cartons allowed stores to keep the milk for up to six months and expanded distribution to smaller retail outlets like convenience stores.

Baskin-Robbins Korea has been exporting ice cream cakes to Middle Eastern countries since 2009. In Korea, the company makes elaborate ice cream cakes with several different flavors in one cake, but, in the Middle East, it makes cakes with only one or two flavors and adds sponge cake to the bottom.

According to a spokesman from the company, the reason is because Middle Eastern consumers are more familiar with cakes as a baked item.