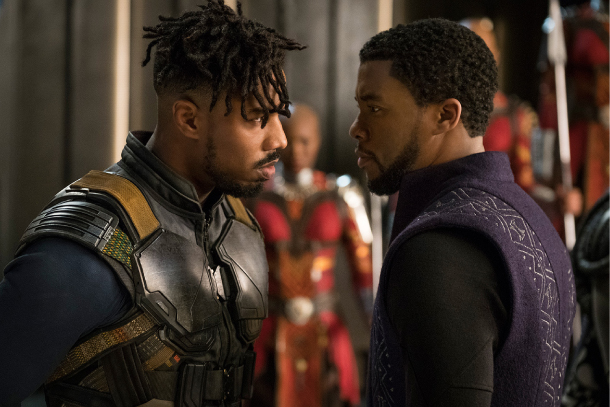 “Black Panther” remained the king at both domestic and North American box offices in its second weekend.

Marvel’s latest superhero film, centering on an African monarch and his state-of-the-art kingdom of Wakanda, once again smashed Korea’s weekend box office, with 709,000 tickets sold at 1,242 screens nationwide, making a total of 4.5 million since its release on Feb. 14. Director Ryan Coogler’s flick accounted for 43.3 percent of the entire weekend ticket sales from Friday to Sunday.

In North America, “Black Panther” scored one of the best second weekends ever with an estimated $108 million in ticket sales, putting it on track to rank among the highest-grossing blockbusters ever.

The Marvel sensation is on a box office course that few films have managed, according to studio estimates Sunday. It is only the fourth film to earn $100 million in its second weekend, along with “Star Wars: The Force Awakens” ($149.2 million), “Jurassic World” ($106.6 million) and “The Avengers” ($103.1 million).

“Black Panther” has grossed $400 million in the United States and $704 million worldwide in two weeks. The film, starring Chadwick Boseman and Michael B. Jordan, has held even better overseas, where it dropped 42 percent this weekend. Its release in China, the world’s second-largest film market, is set for March 9.

“Whatever your projections for ‘Black Panther’ might be, just increase them by 20 percent and you might be on point,” said Paul Dergarabedian, senior media analyst for comScore. “Now the question isn’t so much if it gets to $1 billion, but how far beyond that number does it go.”

“Black Panther” is spurring a surge for the industry. The overall box office is up 12.5 percent from last year, according to comScore.

At a distant second at the Korean box office was a new release, “What Happened to Monday.” The dystopian science fiction thriller, about a set of identical septuplets striving to find one of the missing sisters in a crumbling society, where overpopulation and severe shortages in resources force world leaders to place the world’s future in the hands of science, sold 239,000 admissions at 355 screens in its first weekend.

“The Shape of Water,” one of the strongest contenders with 13 nominations in the upcoming Oscars, scheduled for March 4, rounded out the top five in its debut weekend with 133,000 tickets sold.

Unlike in Korea, the success of “Black Panther” in North America didn’t appear to hurt the handful of new releases.

Faring best was “Game Night,” starring Jason Bateman and Rachel McAdams, from Warner Bros.’ New Line. The comedy, which cost about $37 million to make and was directed by John Francis Daley and Jonathan Goldstein, debuted with $16.6 million, coming in slightly above forecasts. Alex Garland’s sci-fi thriller “Annihilation” opened with $11 million on about 2,000 screens.