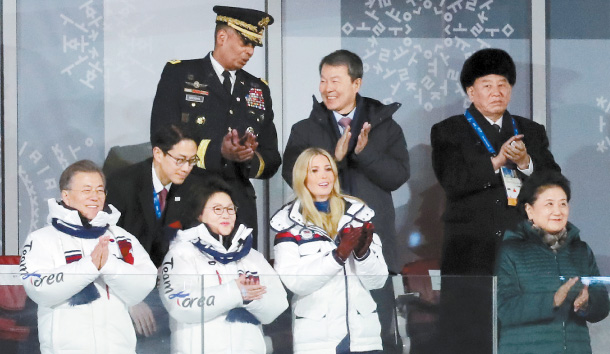 North Korea repeatedly stressed that it is open to dialogue with the United States, a Blue House official said Monday, as President Moon Jae-in continued his efforts to bring Pyongyang and Washington together to resolve the security crisis over the Kim Jong-un regime’s nuclear and missile threats.

“We have revealed multiple times that we are willing to talk to the United States,” a senior Blue House official quoted Kim Yong-chol, the senior North Korean official who visited the South for the closing ceremony of the Winter Olympics, as saying. Kim, a vice chairman of the Central Committee of the Workers’ Party, who is also the director of the committee’s intelligence arm, the United Front Department, made the remarks during a luncheon hosted by Chung Eui-yong, head of the National Security Office of the Blue House.

The source, however, said it was not clear if the North had secret contacts with the United States to express those intentions.

It was the second consecutive day that Kim stressed the North’s willingness to sit down with the United States. On Sunday, Kim told Moon that. During the discussion, Moon stressed the importance of denuclearization of North Korea and holding a North-U.S. dialogue as soon as possible.

According to the senior presidential official, Kim mentioned no precondition for a North-U.S. dialogue when he talked to Moon. The North also did not demand that it be recognized as a nuclear state, he said.

The official said Moon’s meeting with Kim involved a more specific discussion on ending the North’s arms programs. “Denuclearization is a long process,” the official said. “The destination is a complete, irreversible dismantlement. But there can be various proposals to enter the process.”

“Moon went beyond a mere principle,” he said. “He actually talked about what methods we should take for denuclearization.”

The official, however, refused to elaborate on Moon’s vision. He also said the North Koreans gave a response but refused to discuss it.

Another source told the JoongAng Ilbo earlier in the day that Moon elaborated on specific steps for denuclearization during his meeting with Kim. “Moon did not use the terms ‘freeze’ or ‘dismantlement,’” the official said. “But he did explain the roadmap, already reported by the media.”

Moon has promoted a two-step roadmap to end the security crisis prompted by the North’s nuclear threats. According to his proposed first step, the North must place a moratorium on its nuclear and missile tests, freeze any further development of the technologies and join denuclearization negotiations. In return, the international community was to offer corresponding compensations. The second step would be actual nuclear dismantlement.

Moon, however, never made clear what Seoul and Washington would offer to Pyongyang in return for the first step, a freeze. Suspending or downsizing joint military exercises by South Korea and the United States has been discussed as a possible option, as well as an economic assistance package for the impoverished economy of the North.

Moon and U.S. President Donald Trump already delayed this year’s joint military drills until after the PyeongChang Winter Olympics and Paralympics, scheduled to end in March. No official announcement has been made on their new dates.

Moon continued to promote North-U.S. talks when he met with a senior Chinese official for the closing ceremony of the Olympics on Monday.

It was not clear what Moon refers to as the U.S. precondition for talks with the North. Liu came to Korea as a special envoy of Chinese President Xi Jinping for the closing ceremony of the Winter Olympics. According to the Blue House, Moon asked for China’s continuous cooperation to arrange North Korea-U.S. talks.

The North Korean delegation continued their meetings with South Korean officials on Monday. Chung hosted the luncheon for the delegation and Lee Do-hoon, the Foreign Ministry’s special representative for Korean Peninsula peace and security affairs, attended. Lee is the Moon administration’s top nuclear envoy and chief negotiator for the six-party talks.

The two sides discussed maintaining peace on the peninsula after the Olympics, according to the Blue House. They also agreed to cooperate to seek balanced advancement of inter-Korean relations and cooperation with the international community, it said.

It was not clear if Choe Kang-il, deputy director general for U.S. affairs at the North’s foreign ministry, attended the luncheon. Choe did attend the meeting with Moon on Sunday, while Seoul had no counterpart for him. At the time, Moon was only accompanied by Chung and Suh Hoon, director of the National Intelligence Service.

Choe is a veteran diplomat who participated in nuclear negotiations since the 1994 talks between Pyongyang and Washington in Geneva. Because Allison Hooker, the White House National Security Council’s Korea director, accompanied the U.S. delegation for the closing ceremony, speculation was high that they would have contact.

The U.S. Embassy in Seoul, however, told local media on Monday that the delegation had no interactions with the North Koreans during its visit.

The United States urged the North to make clear that any talks will address denuclearization. “We will see if Pyongyang’s message today, that it is willing to hold talks, represents the first steps along the path to denuclearization,” White House Press Secretary Sarah Sanders said in a statement. “In the meantime, the United States and the world must continue to make clear that North Korea’s nuclear and missile programs are a dead end.”

Sanders, who visited the South to attend the closing ceremony of the Olympics, also said the Trump administration is “committed to achieving the complete, verifiable and irreversible denuclearization of the Korean Peninsula,” and there is a broad agreement among Washington, Seoul and the international community that “denuclearization must be the result of any dialogue with North Korea.”