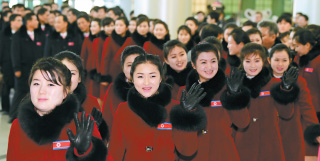 A North Korean delegation of 299 athletes and cheerleaders headed home by road Monday after the closing of the historic PyeongChang Winter Olympics in Gangwon the previous evening.

They included members of the first-ever unified women’s ice hockey team at the Olympics and North Korean figure skating duo Ryom Tae-ok and Kim Ju-sik, who finished 13th in the event and scored a personal best.

The delegation, moving in 10 buses, crossed the military demarcation line (MDL) at 12:38 p.m., through the South’s Customs, Immigration and Quarantine (CIQ) office in Paju, Gyeonggi.

Baek Tae-hyun, spokesman for the South’s Unification Ministry, said in a briefing Monday that their luggage and gear was sent over the inter-Korean border earlier that day around 10 a.m.

The delegation comprised four North Korean Olympic officials, 229 cheerleaders, 45 athletes and 21 reporters, and the group generally looked bright as it got on the buses headed home.

North and South Korean officials were seen congratulating each other as it came time to part, with remarks like, “Let’s see each other soon.”

The cheerleading squad, in their black fur-lined red coats and ankle boots, expressed excitement to return home, while one woman said, “I felt that our language and blood is one.”

Another cheerleader said, “It was most meaningful that North and South Korean athletes joined their strengths and sweated together in the competitions, and that we were able to jointly cheer them on.”

The athletes were stone-faced when they first arrived earlier this month and appeared much more relaxed now that the Games were over.

“All the competitions were memorable,” a member of the inter-Korean women’s ice hockey team told a reporter, adding she hopes there will be a joint ice hockey team at the next Olympics as well.

While observers recognize that the inter-Korean detente may be temporary, the presence of North Korea’s athletes and cheerleaders at the Olympics and restoration of previously severed relations is seen generally as a positive signal.

She told reporters at Incheon International Airport, “It was a wonderful first visit and just exciting and beautiful,” adding she looks forward to returning.

Trump got a lot of attention in Korea, from her airport arrival in Incheon Friday, taking selfies with Korea’s First Lady Kim Jung-sook and Foreign Minister Kang Kyung-wha at a snowboarding competition Saturday and meeting with K-pop star CL and boy band Exo at the PyeongChang Winter Olympics closing ceremony Sunday.

Trump, who was seated next to President Moon Jae-in and the first lady in the VIP box during the closing ceremony, was spotted standing and clapping for the entrance of the inter-Korean athletes. The athletes marched with flags showing the entire Korean Peninsula, as well as their own national flags.

The head of North Korea’s delegation Kim Yong-chol, a vice chairman of the Central Committee of the Workers’ Party, who is also known to be director of the committee’s intelligence arm, the United Front Department, was seated behind Trump during the ceremony.

The attendance of Kim Yong-chol was controversial because he is a sanctioned official accused of having masterminding the 2010 torpedoing of the Cheonan, a South Korean warship.

During the opening ceremony of the Olympics on Feb. 9, U.S. Vice President Mike Pence remained seated when the Korean athletes marched in under the unification flag, despite it being considered polite to stand for the entrance of the athletes of the host country of the Olympics.

Trump tweeted Monday: “Thank you to President Moon, First Lady Kim & the people of South Korea for the warm hospitality you showed me…It was a deeply inspiring celebration of global sportsmanship and teamwork.” She wrote in hangul, “gomabseubnida,” or “thank you” in Korean.

Despite the controversy over North Korea’s charm offensive at the Olympics, Kim Yong-chol’s visit and whether the recent gestures could lead to talks between North Korea and the United States, the South is busy preparing for next month’s Paralympics.

The PyeongChang Paralympic Games kick off on March 9, and North Korea is expected to send a delegation of 150 members including athletes, as agreed during high-level talks last month.

Working-level talks will be held on the northern side of the truce village of Panmunjom at the inter-Korean border to fine-tune the details Tuesday, led on the South Korean side by Lee Joo-tae, director general for inter-Korean exchange and cooperation at the Unification Ministry.