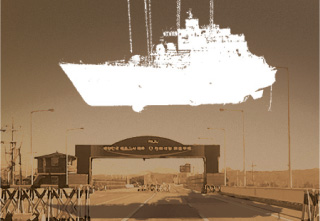 At the southern end of the Unification Bridge connecting Imjingak Pavilion, Paju, Gyeonggi, to the Dorasan Customs, Immigration and Quarantine (CIQ) office was about 400 to 500 people gathered around a sign saying, “Kim Yong-chol is responsible for the sinking of the corvette Cheonan and his visit to the South must be canceled.” Familiar faces from the Liberty Korea Party could be seen. They gathered to block a visit to South Korea by North Korea’s Workers Party Vice Chairman and head of the Unification Front Department Kim Yong-chol. On the morning of Feb. 25, the day of the closing ceremony of the PyeongChang Olympics, the southern side of the Unification Bridge was jammed with cars they brought, police buses and press vehicles.

When they learned that Kim Yong-chol took another route, the protestors quickly dispersed. Party leader Hong Joon-pyo said, “Because we were guarding the Unification Bridge, Kim entered through a dog hole. We showed that the Republic of Korea is undiminished.” Spokesman Chang Jae-won said, “Opening a path to Kim Yong-chol is an abuse of power and an act of treason. The Moon Jae-in administration committed an indelible sin in history.”

The Liberty Korea Party has started a full offensive against the government with Kim Yong-chol’s visit. Floor leader Kim Seong-tae used unreserved and harsh words in front of the Blue House on Feb. 23, calling Kim a “heinous man who deserves to be decapitated in public” and “a man who deserves to be beaten to death.” He even said, “If President Moon welcomes Kim with a handshake, I will not acknowledge him as the president anymore.” The Liberty Korea Party held a protest rally at the Cheonggye Plaza as well.

At the time of the Cheonan sinking in 2010, Kim Yong-chol was the head of the Reconnaissance General Bureau which oversees North Korea’s intelligence operations against the South. If North Korea is responsible for the sinking of the Cheonan as the Korean government concluded, he was in a position that allegedly made him the orchestrator of the incident. Knowing that controversy was inevitable if Kim attended the closing ceremony and met President Moon, North Korean leader Kim Jong-un chose him as his envoy. The Moon administration accepted Kim as the sinking of the Cheonan was caused by North Korea but there was no clear evidence that Kim was the main culprit. As the head of the Unification Front Department is a position equivalent to South Korea’s Director of the National Intelligence and the Minister of Unification, it was hard for the government to refuse his visit.

By making an issue out of Kim Yong-chol’s visit, the Liberty Korea Party is resurrecting the Cheonan incident controversy. An online petition to reinvestigate the Cheonan sinking was posted on the Blue House website, and more than 35,000 people signed in three days. Some are worried that reviving the Cheonan controversy would lead to an endless vortex of division and discord.

The sinking of the Cheonan was controversial from the beginning, and, in a survey, 70 percent of the respondents said that they did not trust the investigation findings of the Lee Myung-bak administration. The government claimed that a “bubble jet” from an underwater explosion of a North Korean torpedo snapped the naval vessel into two. Whether to believe that report was a kind of ideological verification standard. A constitutional justice nominee failed to get approval from the National Assembly hearing when he said, “I respect the government report but remain prudent to be confident.” The sinking of the Cheonan is still a hot potato.

It is not easy to clarify a controversy with another country, and, sometimes, it is wiser to leave it as “unsolved.” The Cheonan incident is different from the controversy over Lee Myung-bak’s ownership of DAS. There is no guarantee that a reinvestigation will bring 100 percent truth. For us, it is best to assume North Korea as responsible and wisely get over it.

The Moon administration is working very hard to make the atmosphere for inter-Korean talks created by the PyeongChang Olympics an opportunity to advance peace on the Korean Peninsula. It is the duty of a responsible administration to use inter-Korean talks to encourage U.S.-North Korea talks to encourage the denuclearization of North Korea. If South Korea should never talk to North Korea because it is the enemy that invaded the South in 1950, bombed a passenger jet and committed the Rangoon bombing, it is impossible to explain how conservative administrations in the past engaged in talks with Pyongyang. If the Liberty Korea Party is a proper conservative opposition party, it should support the government’s efforts for peace while addressing the mistake of not asking for understanding from the victims’ families in advance.

The Liberty Korea Party at the southern end of the Unification Bridge is no more or less than an outdated far-right party that goes against everything the government does and feeds on fanning inter-Korean discord. The PyeongChang Olympics successfully concluded and were praised as the Peace Olympics by media around the world. I wonder what the Liberty Korea Party would say, having ridiculed the Olympics as the “Pyongyang Olympics.” It should stop unreasonable and excessive harping at the administration. By staying so extreme, it will only hurt itself.