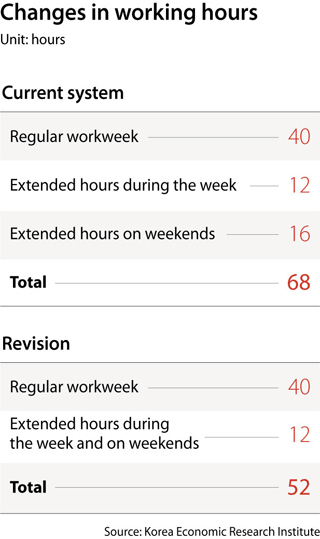 After discussions lasting two days, the employment and labor subcommittee of the National Assembly’s environment and labor committee agreed at around 3 a.m. Tuesday to limit maximum working hours to 52 hours a week, including work on weekends.

The reform of Korea’s labor laws has been strongly pushed by the Moon Jae-in administration as part of its larger agenda of creating more jobs.

Under current law, the work week is 40 hours, which can be extended 12 hours during the week and another 16 hours for weekend work.

Under the revised law, the working week is 40 hours, which can be extended a maximum of 12 hours during the week or on weekends.

The specific industries allowed to extend the 40-hour week will be reduced from 26 to five: land, sea and air transportation as well as other transportation services such as parcel delivery and health workers like caregivers for the elderly.

In a November 2015 report, the Korea Labor & Society Institute estimated that 19 percent of people employed in Korea, or roughly 3.57 million workers, work more than 52 hours a week. Capping working hours to 52 per week will lead to the creation of between 624,000 and 1.08 million new jobs, according to the report.

Moon’s administration claims the change will give more opportunities for women to actively participate in the economy and boost the domestic economy by giving more leisure time to workers on weekends.

Korea ranks second among OECD countries after Mexico when it comes to long working hours. The OECD calculates per capita working hours per year. Korea’s figure as of 2014 was 2,124 hours, slightly behind Mexico’s 2,228 and well above the OECD average at 1,770.

Employers that do not comply face jail time of less than two years or a fine under 10 million won ($9,300).

For companies with fewer than 30 employees, the government will allow a special extension of an additional eight hours per week until Dec. 31, 2022, if the company and its labor union agree.

The committee’s lawmakers have decided to keep current regulations on payments made to employees who work on holidays. Under the current law, when an employee works for less than eight hours on a holiday they get 150 percent of their hourly wages, while 200 percent is paid when they work for more than eight hours.

The revised bill will be reviewed by the Legislation and Judiciary Committee before being put to vote at a regular session at the National Assembly.