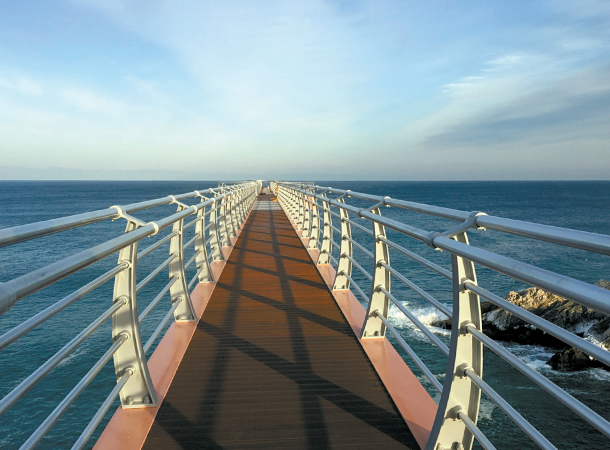 The newly opened Hupo Deunggisan Skywalk in Uljin County is 135 meters (442 feet) long and gives visitors a chance to walk out to the East Sea. The skywalk opens on Thursday. [LEE SUN-MIN]

ULJIN COUNTY, North Gyeongsang - The appeal of being the first to try something new will undoubtedly draw many enthusiastic travelers to Uljin County this season.

1. The Nagok Deep Sea Fishing Park in Uljin County is where not only hobby fishermen gather to fish, but also traveler come to check out beautiful seascapes. 2. The set for the 2016 KBS drama “Uncontrollably Fond,” is now a cafe. 3. Outside the cafe is a large smartphone-shaped structure, perfect for those looking to take a photo. [LIETTO, LEE SUN-MIN]

The Hupo Deunggisan Skywalk, a new bridge that extends out to the East Sea, is ready to welcome travelers from across the country Thursday. This bridge will be popular for those who enjoy thrills as it is 50 meters (164 feet) above the surface of the water, and extends 135 meters into the East Sea.

When you step onto the skywalk, you get the feeling that you are floating in air to see the view of the towns along the coast and the sea right below your feet. Some parts of the skywalk are covered with clear, fortified glass adding a thrilling sight to visitors. When the winds gust, you will find yourself taking careful steps, one by one, and even holding on to the rails so you won’t fly away. The skywalk will open as the town’s famous crab festival starts Thursday.

After an exhilarating visit to the skywalk, head out in search of some of the local delicacies. The county, known for its snow crabs, gets the highest amount of visitors in the late winter, when the crabs are at their largest. There is a common saying among locals that crabs caught around two weeks after the Lunar New Year don’t even need to be checked because they are surely fat and tasty. To show off the crabs at their best, the county is holding the Uljin Snow Crab and Red Snow Crab Festival starting Thursday. Until Sunday, areas around Hupo harbor will be filled with spots to taste crabs as well as games and other fun activities. Visitors can also buy crabs at the festival. The prices of crabs depend on the quantity of catches made each day, but usually the price of a snow crab is around 35,000 won ($32.50) a piece. Red snow crab is a bit cheaper at around 25,000 per crab.

Korean drama fans can find traces of some of their favorite stars like Kim Woo-bin or Suzy in the county. The romantic drama “Uncontrollably Fond” in which Kim plays a terminally ill patient garnered even more attention after Kim was diagnosed with nasopharyngeal cancer last year. The rooms and cafes where Suzy and Kim spent time together in the drama can be found in the wooden building that is just steps away from Nagok Deep Sea Fishing Park. Outside the wooden building is a large structure that is shaped like a smartphone. Inside the structure is a couch and a light that makes it a perfect place to take a photo and a break.

About a minute away from the filming site, closer to the sea, is the Nagok Deep Sea Fishing Park. Decks and bridges are set up so that visitors can walk close to the water, and fishermen can walk out towards the sea to have easier access to fish. The choppy waves crash near the walkways, making for a dramatic backdrop for photos.

The Uljin Snow Crab and Red Snow Crab Festival, set to open Thursday, offers a chance to taste crabs, above, and play games, middle. Crabs are laid out on the floor, top, so that merchants can check the size before an auction. [LIETTO]

All the major spots to visit in Uljin County above, including Hupo Harbor, the skywalk, and Nagok Deep Sea Fishing Park are located alongside Course No. 24 on Haeparang-gil. Haeparang-gil is the longest trail alongside the East Sea, extending 770 kilometers (478 miles). There are a total of 50 courses on the trail, giving visitors many options if they want to spend their day walking.

Along the trail, it is easy to spot many fish, squid and other seafood being dried along the roads, depending on the season. Since the town is mostly known for its snow crabs, there are some large crab statues scattered here and there.

Maehwa-ri village is known for its painted walls. The street from the Maehwa-ri town office to its welfare center is about 250 meters long and the walls along the road are covered in 50 paintings to entertain passersby. The street is known as Lee Hyun-se Manhwa Geori, named after a popular cartoonist who hails from the village. The name translates to cartoon street, and many of the murals depict scenes from Lee’s works, such as “Blue Angel.”

There is also a library on the street open to anyone who wants to come in and flip through the one thousand books in its collection, including some of the famed cartoonist’s popular comics.