James Dean’s jacket is up for auction

James Dean’s jacket is up for auction 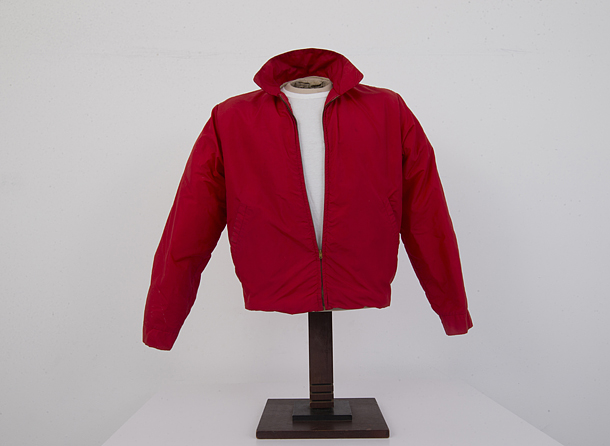 A jacket worn by actor James Dean in the film “Rebel Without a Cause” is displayed at Palm Beach Modern Auctions in West Palm Beach, Florida. The jacket, privately owned since Dean wore it in the 1955 film, will be publicly auctioned on March 3. [AP/YONHAP]

WEST PALM BEACH, Florida - James Dean’s cherry-red jacket from “Rebel Without a Cause’’ is expected to bring up to $600,000 when it goes up for auction this week in Florida, offering fans a rare chance to own something linked to the actor who died at 24.

The bomber-style jacket still looks cool at Palm Beach Modern Auctions, where it was displayed recently on a mannequin dressed in a white T-shirt and blue jeans, similar to Dean’s signature style in the movie.

That sounds pricey, but Baca said the jacket is as important to pop culture as a dress worn by actress Marilyn Monroe, one of Elvis Presley’s rhinestone jumpsuits or gloves worn on stage by singer Michael Jackson.

Dean died in a car crash in September 1955, about a month before the premiere of the film that cemented his status as an icon of teen defiance. Because he died so young and starred in only three movies, collectibles tied to him are scarce, Baca said.

The dress Monroe wore to sing “Happy Birthday’’ to President John F. Kennedy sold at auction for $4.8 million in 2016. One of Jackson’s white gloves was auctioned for nearly half a million dollars in 2009, and one of Presley’s rhinestone suits sold for $250,000 last year.

Michael Scott of Hobe Sound has had the jacket since the 1980s. A friend whose uncle got the windbreaker from men’s wardrobe supervisor Leon Roberts at the end of filming left it to Scott in his will. The actor had been a hero to Scott and his friends, who were in high school when the film premiered.

“We were called greasers,’’ Scott said. “We were going through some of the same kind of torment that he was living in the script.’’

The garment has a Bud Berma tag sewn into its lining, a cigarette burn on the left sleeve and stitching to take in its elasticized waist to fit the trim Dean.