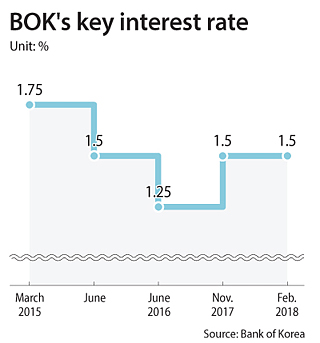 The central bank held its key interest rate at 1.5 percent in a unanimous decision on Tuesday as it awaits a rate decision from the U.S. Federal Reserve and inflation continues its slow climb.

The rate freeze means that the Bank of Korea (BOK) could potentially offer lower rates than the U.S. Fed for the first time in over 10 years. The Fed is expected to raise rates to the upper range of 1.75 percent during the next Federal Open Market Committee (FOMC) meeting in March.

The Bank of Korea’s move came as other major central banks turn towards monetary tightening. Gov. Lee Ju-yeol cited trade protectionism in the United States and low inflation for holding off on a rate increase, especially after the Bank of Korea raised the key rate in November for the first time in six and a half years.

“We froze the rate to see how things will unfold in the face of uncertainties from the protectionist stance, at a time when the economy at home and abroad is maintaining steady growth,” Lee said.

The central bank governor also brushed off concerns that the potential reversal of interest rate levels between the two countries will trigger a capital flight to American securities.

“When U.S. interest rates are higher than Korea’s, it could translate into pressure for capital outflow,” Lee said. “But a massive foreign capital exodus is unlikely.”

The governor went on to cite sufficient foreign reserves and healthy current account surpluses as factors to hedge any negative effects from a Fed hike.

Lee also took note of growing threats from the Trump administration to raise tariffs on major Korean exports including steel and home appliances as well as GM Korea’s potential closure of its factory in Gunsan, North Jeolla.

“For now the impact is limited when we try to convert the effect into numbers,” Lee said. “But if such a trend expands, its impact on Korea’s economy could be more severe.”

The markets are closely scrutinizing the governor’s comments to predict the next BOK decision as analysts sense that the bank will raise its key rate one or two times this year.

“The February remarks sound neutral and show no major difference from that of January,” said Chung Eui-min, a fixed-income analyst at Mirae Asset Daewoo.

“We expect the central bank to raise its rate during the second quarter, given that the Fed is expected to raise rates in March and June. May appears to be the ideal time because it is one month after a new governor takes office.”

Lee is expected to step down in March.

Kang Seung-won, an analyst at NH Investment & Securities, predicts the bank will likely delay a rate increase to July as it continues to strike a cautious note on tightening.

“Market uncertainties have intensified due to the GM issue and growing protectionist moves,” Kang said, “so the Bank of Korea will likely raise its rate in July after referring to the FOMC meeting in June.”