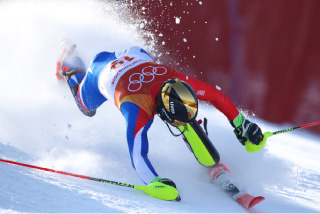 Throughout the PyeongChang Olympic Games in Gangwon, the BBC broadcast daily highlights. They not only featured the outstanding skills of the gold medalists and glorious finales but also included mistakes made by the athletes. A skier slipped on the slope and bumped into a cameraman, a speed skater fell right after starting and a curler threw a stone belonging to the other team.

These are regrettable moments for Olympic athletes who had trained for an event for four years, but, as a viewer, I found them interesting. The BBC presenters laughed and made jokes, and the subtitles said that the athletes were okay, and viewers need not worry. The athletes who made the mistakes were far from despair as well. They quickly got up and finished the race or showed a funny face and focused on the second or third run.

The lives in PyeongChang that athletes shared on social media were more fascinating. They showed how they finished four portions of beef sirloin per person, held onto chopsticks, waited for hot soup to be served and lay on the hot-stone floor in pajamas in their rooms. U.S. snowboarder Shaun White won a gold medal in halfpipe after eight years and visited a restaurant whose owner is a big fan of White and has a burger named after him. The moment that Shaun White put his gold medal on his Korean fan was a gold medal moment in its own right.

While medals are prizes for effort, the Olympics is more than just the number of medals won. During her event, 18-year-old Chloe Kim tweeted, “Wish I finished my breakfast sandwich but my stubborn self decided not to and now I’m getting hangry.” Upon winning a gold medal in halfpipe, she bit into her snack.

Short-track skater Elise Christie of Britain received cyber harassment from Korean fans when she crashed into Park Seung-hee at the 500-meter final at the 2014 Sochi Games. She fell again in PyeongChang and did not win a medal. But she said through tears, “I know it’s short track and I’m supposed to be prepared for this.”

Hopefully, Korea can also create a culture that lessens the burden on athletes. Canada’s Kim Boutin won a bronze medal in the 500-meter final after a penalty was given to Choi, and she had to shut down her social media account due to threats that she had made a foul. Kim Bo-reum was accused of bullying her teammate in the speed skating team pursuit, and she apologized and bowed after winning a silver medal in the mass start final. But she did not attend the closing ceremony.

Hwang Dae-heon won a silver medal in the 500-meter short track, but after he fell in the 1,500-meter and 1,000-meter races he quipped, “I thought it was just one day in my life.” What make the Pyeongchang Olympics great are the humorous and cheerful Olympians like Hwang.