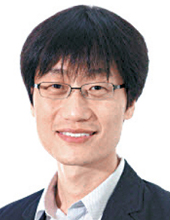 Naver co-founder Lee Hae-jin will relinquish his seat on the board of directors of the company.

Naver said Monday that Lee decided to focus on his role as global investment officer and step down from the tech giant’s board on March 19 when his current term expires.

Market analysts, however, think Lee is trying to stop being considered the company’s owner by the government.

Analysts had speculated whether Lee would quit the board after Naver was designated a “quasi-chaebol” by the Fair Trade Commission last year. Lee was labeled the essential owner of the company.

The commission said Lee was the largest individual shareholder with 4.31 percent share of the company, and had exercised governance. Lee is hoping to rid himself of that label in May when another round of designations of companies will be done by the Fair Trade Commission.

Companies in the quasi-chaebol group are subject to various limitations and obligations including making their business transactions more transparent. The owners of the companies take on legal responsibility for the business in the case of mismanagement. If the company gives favors to other companies operated by the owners’ relatives, they will be tightly monitored as well.

The Fair Trade Commission uses such guidelines to oversee family-run businesses or chaebol like Samsung and Hyundai Motor Group.

Lee had been hoping to avoid being designated Naver’s owner despite its quasi-chaebol designation. Steelmaker Posco and mobile carrier KT have such status, but professional managers run the companies, not members of a founding family.

Lee chaired Naver’s board since it was founded in 1999 and left that post last March. Currently, Naver is run by CEO Han Seong-sook, who climbed the corporate ladder.

Lee’s board position will be filled by Naver executive director Choi In-hyuk after attaining approval at the upcoming shareholders’ meeting scheduled for March 23.

Lee Jong-woo, professor of multimedia science at Sookmyung Women’s University, also decided not to extend his term as a director of Naver as of March 19. Business professor Lee In-moo from the Korea Advanced Institute of Science and Technology will likely fill the outside director post.