A show that’s circus-cum-club : Seoul Institute of the Arts puts on a riotous blend of tech and dance

A show that’s circus-cum-club : Seoul Institute of the Arts puts on a riotous blend of tech and dance

The Seoul Institute of the Arts’ experimental performance “Club Oneness” is an adaptation of Shakespeare’s “A Midsummer Night’s Dream” fused with robots, artificial intelligence and moving lights. [SEOUL INSTITUTE OF THE ARTS]

When guests arrived at the experimental robotic art show “Club Oneness” on Friday, they were each given an illuminated bracelet similar to one a late-night reveler might receive at a club in Gangnam. Indeed, the space might as well have been set in one of Seoul’s party district. A disco ball on the ceiling beamed lights of color in all directions. EDM blasted through speakers amid flowing wine and beer. 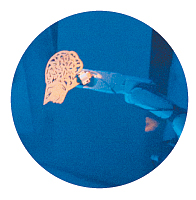 Except this wasn’t a posh joint in Gangnam. It was a school, the Seoul Institute of the Arts to be exact, and the guests were audience members in a show set at the university’s Art & Technology Expression Center in Ansan, Gyeonggi.

From the get go, the show promised to be an unconventional one. There was no stage or auditorium. “Club Oneness” was truly made to feel like a club.

Perhaps it was the alcohol or the dazzling Dongchun Circus Troupe that appeared 10 minutes after the club’s opening that had guests attuned to the unfamiliar atmosphere. They whooped and clapped as acrobats made spine-chilling jumps and twirls in the air behind a 3-meter-high (9.8-foot) translucent curtain. Two robotic arms danced to the music throughout the night, their moves powered by artificial intelligence software. According to the university, two songs performed that evening were also composed by an AI program.

“Club Oneness” is the latest experimental show presented by the Seoul Institute of the Arts, a collaborative project involving professors, students and alumni that fuses technology and the arts. The show strives to break the boundaries of conventional theater and invites audience members to be part of the show alongside cutting-edge digital technology like robots, AI and moving lights. In between shows, an emcee comes out and invites audience members to participate in games, including a dance-off. 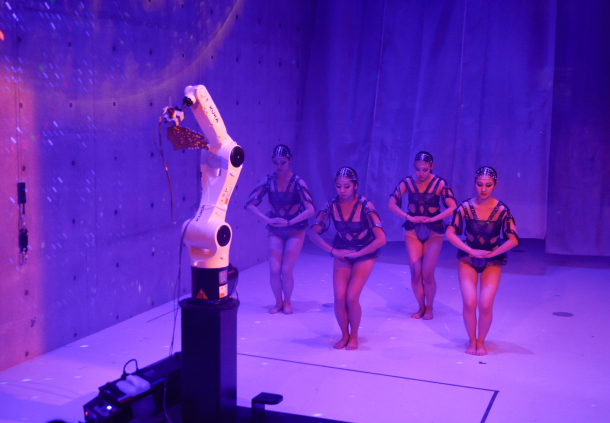 During the show, two robotic arms and human performers dance to two songs composed by an AI program. [SEOUL INSTITUTE OF THE ARTS]

With so many moving parts, “Club Oneness” might seem like a haphazard show, but there is a storyline - adapted from Shakespeare’s “A Midsummer Night’s Dream” - that keeps it flowing. In the second half of the show, audience members are invited to move behind the translucent curtain to the other side of the hall, where a live band plays world music composed by Indonesian musician Djaduk Ferianto and Lee Jeong-pyo, a professor at the school, accompanied by actors who play out Shakespeare’s story.

The Seoul Institute of the Arts is best known for its celebrity alumni that includes actors and comedians, but it is trying to move beyond that image and mold itself as a pioneer of its self-stylized “New Form Art” that blends technology and art to create a new genre for the “fourth industrial revolution.”

Yoo Duk-hyung, president of the university, said it is time for Korea to move beyond K-pop and allow the country’s advanced technology to fuse with the arts. It was Yoo who conceived of the Art & Technology Expression Center as a place without the boundaries created by a stage so that “everywhere inside the center can be used as a stage.”

“The school plans to put on more experimental shows like this one at our Namsan Arts Center in central Seoul this year,” Yoo said. “We will continue to make attempts to create such ‘New Form Art’ performances that can also be well received by the people, and, you never know, the efforts will pay off and we might get invited to stage it solo at renowned venues like Lincoln Center one day.”