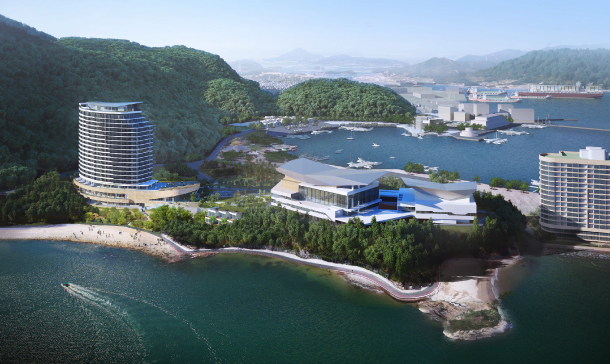 The annual Tongyeong International Music Festival is held at the Tongyeong Concert Hall located in South Gyeongsang. This year’s festival, “Returning Home,” will kick off on March 30. [YONHAP] 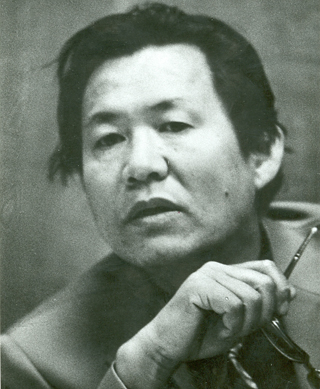 “Last Friday in Berlin, we witnessed a historical moment,” said Florian Riem, CEO of Tongyeong International Music Foundation, who personally carried Yun’s ashes to Tongyeong, South Gyeongsang, at a press conference on Tuesday at the Goethe Institut in central Seoul. “After decades of struggles and arguments with the government after denunciations and posthumous defamation, the remains of Isang Yun went on a final journey back to his hometown, where he will be in his final resting place.”

The composer spent half of his life in the coastal city of Tongyeong, where he was born, and the other half in Berlin, where he studied at the Hochschule fur Musik. Yun, who was an advocate of reunification, was unable to return to his motherland for his connection to Dongbaengnim (the East Berlin Spy Incident) in 1967, in which he was accused by then-President Park Chung Hee’s military regime of being a spy.

However, Yun’s wife Lee Su-ja, who is now 91, has insisted that her late husband’s dying wish was to return to Tongyeong. He will be buried on a cliff looking over the ocean next to the Tongyeong Concert Hall, which is dedicated to his music. 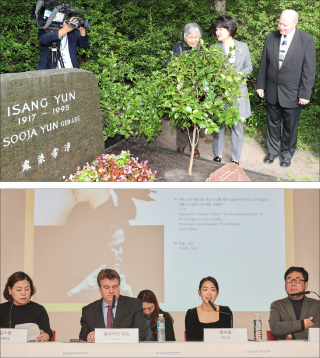 On Feb. 23, his ashes were carried out of the Gatow Cemetery in Berlin, where the composer was buried after his death in 1995. He was supposed to arrive around mid-March, but made an early return on Sunday, allowing for enough time to prepare for the relocation ceremony scheduled to take place on March 30, the opening day of the annual Tongyeong International Music Festival.

“It was also a historical day for his many European friends,” Riem continued. “For 23 years, Germany has remembered him and honored him. Berlin was Yun’s second home. Germany celebrated his greatest successes and in Germany, his music was performed more and appreciated more than anywhere else in the world.”

Although Yun became a German citizen in 1971, Riem said that Korea was “always close to his heart.”

Lee Yong-min, secretary general of the foundation, said the attempts to bring Yun’s ashes home have been made for many years, but discussions picked up last year, which marked the 100th anniversary of Yun’s birth.

“Yun’s wife sent a letter to Berlin last year insisting that she wanted to be with her husband, who always said he wanted to be buried in Tongyeong,” said Lee.

It was coincidental, says Kim So-hyun of the foundation, that the title of this year’s festival is “Returning Home.”

The 10-day festival will showcase 25 performances, including a musical titled “Returning Home,” produced by the foundation. The stage show, which will be performed three times during the festival, fuses the Greek mythology of Penelope and Ulysses with gagok, a genre of traditional Korean vocal music that combines emotional and poetic lyrics with instrumental accompaniment.

For the opening performance, the Bochum Symphony Orchestra from Germany will perform Yun’s “Exemplum in Memoriam Kwangju,” Stravinsky’s “Firebird Suite” and Brahm’s “Violin Concerto in D Major,” with accompaniment from violinist Chung Kyung-wha.

The program also includes the world premiere of Yun’s “Poems of the Nakdong River,” which will be performed by the Hanover Chamber Orchestra on April 5. According to Kim, the sheet music of this piece was never published and the foundation learned of its existence last year.

“We were given some of Yun’s sheet music and manuscripts from his wife and found this music that was never published,” she said. “We reorganized it and printed it so that we can really celebrate Yun’s return by premiering one of his hidden pieces.”

According to Riem, Yun’s family and friends will hold a private ceremony on March 30 and then open it to the public afterwards.

The opening performance of the festival will begin at 7:30 p.m. at the concert hall. For more information about the festival, visit www.timf.org.