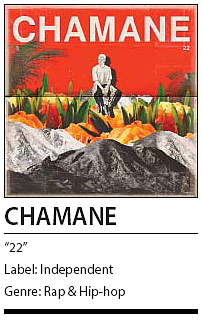 After his first EP album released 3 years ago, rapper ChaMane is back with his second EP “22” which was released on Feb. 14. The rapper first appeared in 2014 on cable channel Mnet’s “Show Me The Money 3” under Team Illionaire.

This album fits with ChaMane’s bright and energetic personality, but it also talks about the young rapper’s hardships that he went through when he was on a break. He was treated for depression and panic attacks, and, despite his sorrows, he decided to work on music and pursue his dreams.

In the title track “22,” the rapper describes his financial difficulties and the responsibility he feels for his family.

However, the lyrics also show his determination and passion for rapping, which he says he will never give up. The general mood of the song is smooth, with strong beats that blend nicely with the rapper’s voice.