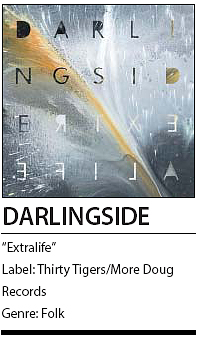 Not everything Darlingside does turns to gold, and yet the stylistic quartet out of Massachusetts doesn’t sound like anybody else.

On its latest release, “Extralife,’’ the band continues down an utterly original path through an inconsistent 12-track set. The style is a melding of folk, chamber pop, baroque, progressive and indie rock that defies labeling. The lyrics are sometimes pretentious, and some melodies are cloying.

But there also are moments of great majesty.

Some of the band’s influences lie near the surface. Its members surely played the Beach Boys’ “Pet Sounds’’ on repeat until they mastered the four-part harmonies (they also might have absorbed some of the lyrical touches of that psychedelic era, the kind that sounded brilliant under the influence but later made no sense).

But the sound is rooted in harmony, and when Darlingside gets it right and leaves the search for deeper meaning aside, the effect can be sublime. So yes, the album suffers from inconsistency. But, when it reaches up and grabs you, it soars. AP