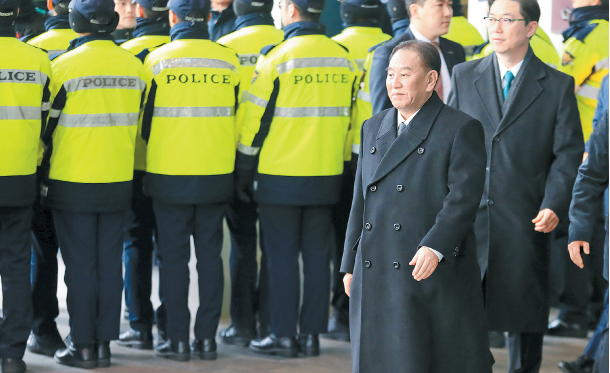 Kim Yong-chol, front, a vice chairman of North Korea’s Central Committee of the Workers’ Party, who led an eight-member high-level delegation to South Korea to attend the closing ceremony of the PyeongChang Olympics, walks out of the Grand Walkerhill Seoul hotel in Gwangjin District, eastern Seoul, to return to his country Tuesday morning. [YONHAP]

North Korea’s high-level delegation to the Olympics closing ceremony returned home Tuesday after meeting with authorities in the intelligence, diplomatic and inter-Korean relations sectors as the Moon Jae-in administration takes on the big challenge of brokering talks between Pyongyang and Washington.

The eight-member delegation led by Kim Yong-chol, vice chairman of North Korea’s Central Committee of the Workers’ Party, who is also known to be director of the committee’s intelligence arm, the United Front Department, wrapped up a three-day visit to South Korea at noon Tuesday, driving up a road linking the two countries along the west coast.

None of the delegates took questions from the media as they left the Gyeongui Highway Transit Office in Paju, Gyeonggi.

Through the meeting, both sides agreed to “improve South-North relations and continuously make efforts to herald peace on the Korean Peninsula,” the ministry said, adding that their shared evaluation of the PyeongChang Winter Games was that the 17-day event “ended successfully through inter-Korean cooperation.”

The high-level delegation, North Korea’s second for the PyeongChang Winter Olympics, arrived in South Korea on Sunday morning to participate in the closing ceremony that night in Pyeongchang County, Gangwon. With its exit, there are no known North Korean Olympic visitors left in the country.

Over 500 North Koreans crossed the border before and during the Games to participate in various Olympic-related events.

The fact that Kim Yong-chol and his cohorts remained in the South for two more days after the closing ceremony highlighted the momentum of inter-Korean talks and the thawing of tensions. When North Korea sent a delegation to the Incheon Asian Games closing ceremony in October 2014, the group rushed home the same day.

The length of time the delegation spent was announced from the start, although the South Korean government released barely any information on Kim’s itinerary and remarks during that time, in part due to security risks.

Kim’s visit was vehemently protested by South Korean conservatives because he was blamed by past administrations for overseeing fatal attacks on the South that killed dozens.

The delegation is known to have remained in the Grand Walkerhill Seoul hotel in Gwangjin District, eastern Seoul, throughout most of their stay, holding behind-the-scenes meetings with top officials from the South.

According to a senior Blue House official on Monday, Kim stressed that North Korea was open to talk with the United States, adding the regime repeated “multiple times” its intentions to do so.

It is not known whether the delegation specifically mentioned any preconditions for such discussions, but a different high-level Blue House official said Tuesday that both Koreas have “overall talked about various preconditions for North Korea-U.S. talks, and which steps to take for that issue.”

“We candidly conveyed our thoughts to the North, and they shared their thoughts, too,” the official said. The South Korean officials “who met with the North Korean delegation will have to gather what they heard from them, analyze [the comments] and explain the situation to the United States.”

South Korea’s job is to search for a way for Pyongyang and Washington to start dialogue “more smoothly,” the second Blue House source said, adding that it would be “difficult” for the countries to talk with each other if they insist on the other side fully fulfilling preconditions in advance.

On another front, a working-level meeting between the two Koreas discussing the North’s participation in the upcoming Paralympics was held Tuesday on the northern side of the Panmunjom truce village, which straddles the border.

Both sides agreed that North Korea will send its athletes and officials from the national Paralympic committee on March 7 by taking the same west coast road as the high-level delegation, according to the Unification Ministry.

Lee Joo-tae, director general for inter-Korean exchange and cooperation at the Unification Ministry, led a three-member delegation of interlocutors from Seoul, which also included Song Hye-jin, a director-level official from the same ministry, and another sport official who helms the Paralympic Bureau of the PyeongChang Organizing Committee for the 2018 Olympic & Paralympic Winter Games (Pocog).

Participating from the North Korean side were Hwang Chung-song, a director of the Committee for Peaceful Reunification of the Country of the Democratic People’s Republic of Korea, a cabinet-level agency overseeing South-North relations and two other senior officials from the Central Committee of the Korean Federation for Protection of the Disabled.

As the meeting was being held, the main opposition Liberty Korea Party (LKP) vowed Tuesday to renew efforts for a campaign that stresses no talks between South and North Korea or between North Korea and the United States should be held unless the regime promises to fully denuclearize.

That call starkly contrasts with Moon’s no-strings-attached stance for inter-Korean dialogue, as the LKP tries to reverse its low approval ratings by cashing in on any backlash against Kim Yong-chol’s visit.

An internal committee that attempted to block Kim’s arrival due to his reputation for masterminding the 2010 Cheonan attack and shelling of Yeonpyeong Island has been renamed the “North Korea Denuclearization Special Committee.”

Led by six-term lawmaker Kim Moo-sung, the committee pledged to block the Moon government from trying to negotiate a deal with Pyongyang on the condition that it freezes its nuclear development program, adding that its preferred option was to cooperate with Washington in pressing for an all-out denuclearization from the start.