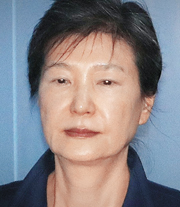 The prosecution on Tuesday asked a local court to punish former President Park Geun-hye with a 30-year prison term for a series of abuse of power and corruption she allegedly committed during her presidency.

The Seoul Central District Court held a final hearing for Park, Korea’s first leader to be removed from office and indicted. The trial against her involves 18 charges, including charges for accepting bribes from the country’s largest conglomerates.

The court is expected to announce the verdict and sentencing on April 6.

The 66-year-old former president did not show up for the session. She has been boycotting the trial since October of last year in protest of the court’s decision to extend her physical detention.

“As a result, the accused faced the unprecedented presidential impeachment, tainting the constitutional history.”

The prosecution also asked the court to levy 118.5 billion won ($110.2 million) in fines against Park in addition to the 30-year prison term.

Park, impeached in December 2016 and formally removed from office in March 2017, was indicted in April on 18 charges. Although Park did not receive money directly, prosecutors concluded that she received bribes from conglomerates in collusion with her longtime friend, Choi Soon-sil.

She was accused of forcing conglomerates to contribute 77.4 billion won to two non-profit foundations Choi controlled. She was also indicted of receiving or demanding 43.3 billion won of bribes from Samsung Group.

Park was also accused of abusing her power by blacklisting artists and cultural figures deemed critical of her administration and exercising undue influence on appointments of public servants. She was also indicted for ordering her aide to leak government secrets to Choi.

“The accused followed the same bad practices of a cozy relationship between politicians and businessmen that existed during the past authoritarian regimes,” Han said. “She therefore abandoned her vow to the people to bring an economic democracy.”

The prosecution also criticized Park for her attitude during the investigation and trial. “Although media repeatedly raised suspicions multiple times about Choi’s intervention in state affairs, Park criticized them as ‘political attacks’ and deceived the entire nation,” Han said.

“When the court issued a new detention warrant during the trial, she argued it was political retaliation, trying to distract from the truth of the scandal.”

Before the session began in the morning, Judge Kim Se-yun said the Seoul Detention Center had sent a report that Park is refusing to go to the courtroom and that it is difficult to force her attendance. “It is unavoidable to carry on the hearing without her presence,” Kim said. “We will do so in her absence.”

The court heard the prosecution’s final presentations of evidentiary documents in the morning. In the afternoon, the prosecution and Park’s lawyers each gave their final arguments.

Since October, Park has boycotted her trial in protest of the court’s decision to extend her physical detention. She said at the time she has no faith in the court, and all her lawyers also resigned en masse.

The court appointed five public defenders and resumed the trial in November, but Park continued her boycott, citing her poor health conditions. Until now, the trial proceeded in her absence.

Park was supposed to give her final statement after the lawyers’ argument, but skipped the opportunity.

“She is ultimately responsible for the abuse of power and corruption scandal,” Han said in the closing argument, asking the court to sternly punish her to assure that a tragic history must never repeat.

The prosecution had asked the court to punish her co-conspirator, Choi, with a 25-year prison term. Earlier this month, Choi was convicted of most of the 18 charges she was indicted on, and the court also recognized her conspiracy with Park in many areas. She was ordered to serve 20 years.

Although Park has refused to meet with the public defenders, they gave a closing argument to seek the court’s leniency. “For our bright future, we must not dismiss all things Park had done for the country,” Park Seung-gil, a public defender for the former president, said. “Although she made mistakes, her hard efforts must be considered. Even if the court will convict her, we ask for leniency because she made no private gains.”