French Embassy to be renovated by Koreans

French Embassy to be renovated by Koreans 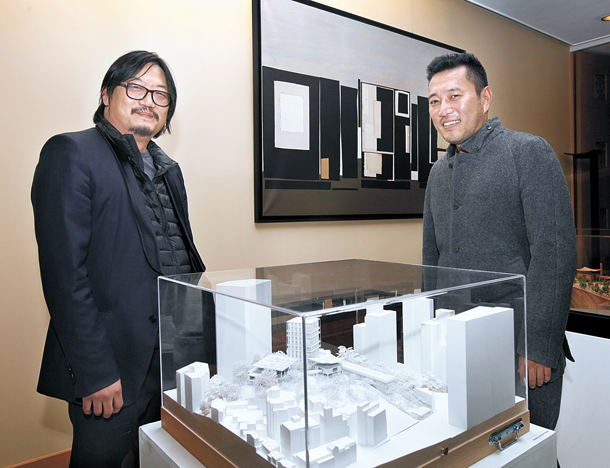 Yoon Tae-hoon, left, and Cho Min-suk, architects tasked with renovating the French Embassy in western Seoul, stand with a model of their renovation plan at the embassy on Feb. 11. [PARK SANG-MOON]

The French Embassy in western Seoul, which was designed by Kim Joong-eop, an architect who studied under Le Corbusier, will be renovated by a Korean-French architect who has come to Seoul looking for his roots.

“I left Korea in the mid-80s and lived in France,” said Yoon Tae-hoon, architect and principal of Paris-based Sathy. “I studied architecture and opened up my office. I was almost sure I would never go back to Korea or do something for Korea. But at the Korean pavilion competition at the Venice Biennale, I met Cho Min-suk and we decided to do this project together for the French Embassy in Seoul.”

Yoon and Cho, architect and principal of the Seoul-based Mass Studies, won the project to renovate the French Embassy compound. In two years, the compound will have a 10-story tower and a pier-like structure added to the current office building.

The current French Embassy compound, which consists of two buildings, was built by Kim in 1959. Kim designed the roof of the office building with the elegant slope of a traditional Korean home and has received great acclamation from other architects for its beauty.

Its shape has since changed, however, as a result of several renovation projects.

“The plan is also to restore the roof of the building that houses the offices, empty out the first floor and restore the piloti,” Cho said. “The roof will be back to the original shape it had when Kim built it.”

“Our idea is to be discrete, not show off,” Yoon said. “Some competitors for the project wanted to build things in the garden space. We wanted to be polite and respectful of Kim’s work and show the difference between the old and the new. The intention is to find and preserve that first spirit. The public space will be on a horizontal plane [the pier] and the administrative space [the tower] will be on a vertical plane.”

“The tower will be protecting the pavilion from the apartments in the background, like a byeongpung [folding screen],” Cho said. “And it will be in a darker tone, because we want to recede from the original buildings, which will stand out and receive full sunlight.”

The French Embassy hosted a launching event for the renovation on Feb. 11, which was also attended by French Minister for Europe and Foreign Affairs Jean-Yves Le Drian. The minister represented French President Emmanuel Macron at the opening ceremony of the PyeongChang Winter Olympics in Gangwon.

“The modernization of the Embassy of France to Korea contributes to further reinforce relations between our two countries,” said French Ambassador Fabien Penone, “and is a strong symbol of the new alliance between France and Korea.”

Yoon said he hopes to pitch in on more projects in Seoul, especially projects that involve redeveloping common spaces in urban areas.

“I’m concerned about the social aspect of architecture, how people live and share common spaces, so I’ve been involved in social housing projects in Paris,” he said. “Actually, recently we asked three groups of neighbors in a location in Paris to participate in a game that I’ve designed, where they can use small models of buildings and houses to design how they’d like a common space in the neighborhood to be redeveloped.”

He added, “What’s interesting was when we took in their ideas and presented a model for redeveloping the space, there were some residents who had not played this game who protested, but then there were others who had played the game who stood up for the redevelopment plan. It was interesting to see how people start to visualize and be involved in the project.”

When asked if he would be interested in doing more projects in Seoul, Yoon said, “Yes, I’m definitely looking for more.”