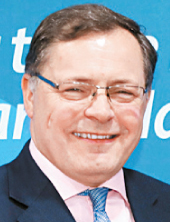 Hay, who came to the current position in February 2015 and will return home soon, is credited with helping return to the Seoul Metropolitan Government part of the British Embassy’s compound located on a pathway along the stone wall encircling Deoksu Palace, a royal residence of the 1392-1910 Joseon Dynasty.

In August of last year, the British Embassy agreed to transfer 100 meters (328 feet) of the stone-paved pathway to the Seoul Metropolitan Government, which then opened it up to the public. The compound of the British Embassy has been sitting on a strip of the palatial perimeter since the 1950s, resulting in a 170-meter break in the 1.1-kilometer road, a popular walkway known as “Doldamgil.”

The 100-meter road was originally owned by the Seoul Metropolitan Government. But the embassy did not return the remaining 70 meters of the pathway, which Britain purchased for the building of its legation in Seoul in 1883, because lodgings for embassy staff and its main gate are located close by.

The family of the outgoing ambassador is known to have strong interest in Korean culture.

His wife, Pascale Sutherland, is a lecturer at Seoul’s Ewha Womans University Graduate School of Translation and Interpretation and his elder daughter, Ava, is a black belt in the Korean martial art taekwondo.