The beauty of adding a bit of contradiction : Wim Delvoye finds ways to add fun visual elements to conceptual art

The beauty of adding a bit of contradiction : Wim Delvoye finds ways to add fun visual elements to conceptual art 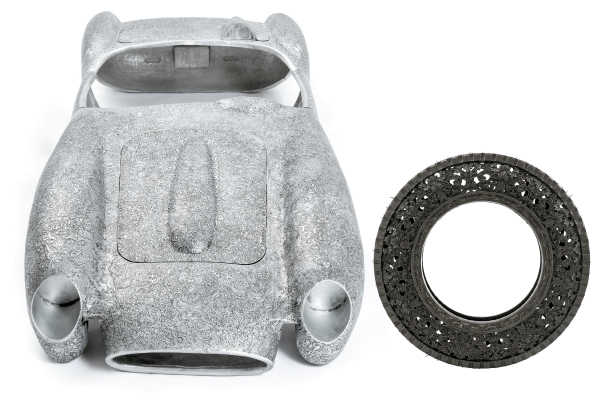 Wim Delvoye’s “Ferrari Testarossa” (2017), above, and “Untitled (Carved Car Tyre)” (2010), right, are fun and have a sense of strange beauty through combining contemporary products with classic patterns embossed or carved by handcrafts. [GALLERY HYUNDAI]

Currently sitting inside Gallery Hyundai in central Seoul are luxury suitcases and sportscars whose aluminum surfaces are embossed elaborately with elegant Islamic patterns. Are they samples of luxury goods designed for Middle Eastern billionaires? What about embossed shovels and black rubber tires carved beautifully with classical patterns seems so absurd?

The things now on display in the gallery range from stainless-steel models of dump trucks and concrete mixers delicately laser-cut with patterns and details of magnificent Gothic cathedrals to creepy bunny slippers made from taxidermied rabbits.

All of these are works by Belgian artist Wim Delvoye, famous for combining contradictory elements in his works. The best example is the “Untitled (Carved Car Tyre).” The mass-produced function-oriented contemporary good, often associated with labor, is combined with exquisite craftsmanship done by hand and traditional decorative patterns that once were exclusive for aristocrats. Some viewers will see both the humor and the beauty in each of his works, while others might read the sociopolitical subtext in them.

The 53-year-old artist presents about 30 pieces of works including those mentioned above in his first-ever solo show in Korea at the gallery. 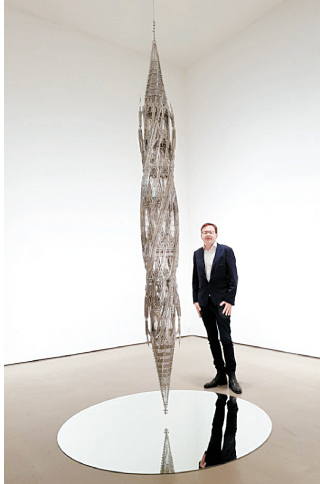 All of the works by Delvoye, who is known as a “Neo-conceptualist,” make a strong visual impact. It seems to be against the visual dryness of conceptual art, which often uses ready-made objects and texts, while resisting having qualities of craft. That dates back to when French artist Marcel Duchamp in 1917 attempted to exhibit a ready-made urinal with the signature “R.Mutt” under the title “Fountain,” questioning the definition of fine art and protesting “retinal art” which focuses on the eyes.

Asked whether Delvoye’s art is a kind of resistance against such characteristics of conceptual art, the artist said in a press preview on Tuesday that it is rather “reaction to conceptual art.”

“Conceptual art was for de-materializing and de-commodifying art; the artists gave [commercial] galleries a hard time. ” he said, smiling. “They focused on the execution of art [rather than the visual impact as a result.] Well, in this aspect of attaching importance to execution, neo-conceptual art is similar. My execution of art includes commissioning the craftsmen of Iran and other cultures and it is an important process.”

“But the difference is that neo-conceptual artists, including me, bring visuality back to art - give art a face again.”

Asked about the ultimate purpose of Delvoye’s art, which combines paradoxical elements with strong visual impact, he simply said, “To entertain.”

“People tend to mistake entertaining for dumb. But they are different,” he added. “And my art is to entertain not only viewers but also myself.”

His simple answers could resonate deeply to those who have questions about concept-heavy and visually-dry contemporary art. Why not to entertain? And why not to be visually beautiful?

The exhibition runs through April 8. Admission is free. For details, visit www.galleryhyundai.com or call (02) 2287-3500.