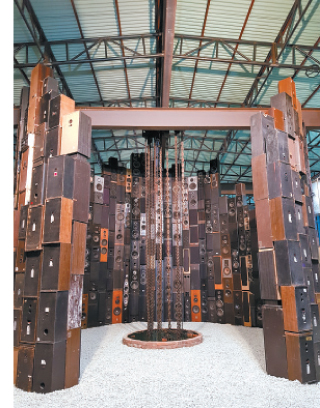 To March 18: As an art event linked to the 2018 PyeongChang Winter Olympic Games and Paralympics, the exhibition explores realities far from the Olympic spirit such as violence, hatred and the tragedies of human history, and the sociopolitical systems and backgrounds behind them.

The exhibition, directed by Hong Kyoung-han and co-designed by three other curators - Yoo Lee, Lee Hoon-suk and Cho Sook-hyun - features 110 pieces of work by 58 artists from 23 countries. The artists range from big names such as the Swiss artist Thomas Hirschhorn and Lebanese filmmaker and artist Akram Zataari to up-and-coming artists.

The venue is 10 minutes by car from the Gangneung KTX Station.

To Sunday: This exhibition features over 2,700 pieces of furniture and other artistic commodities made of plastic.

The vast range of works celebrates the flexibility of plastic as not only a raw material for practical uses, but also its versatility in art.

Over 70 percent of the works on display are products manufactured by Italian design company Kartell, which is a sponsor for the exhibition.

To Sunday: The exhibition, inspired by the popular Italian opera “L’elisir d’amore,” features the joy and pain of love and the evolution of relationships as interpreted by the work of 10 local and foreign artists.

Among the participants is Spanish artist Irma Gruenholz, who makes small sculptures that depict dramatic scenes and then photographs them.

The exhibit also includes the “De-Selfing” series by New York-based Taiwanese photographer Hsin Wang, who takes pictures of herself and her boyfriend in surreal and symbolic ways to depct the painful aspects of love.

Admission is 9,000 won for adults and includes admission to the other shows currently ongoing at the museum, as well as to Seokpajeong, the summer residence of King Gojong’s father, which is located behind the museum.

To April 8: Lotte Museum of Art on the seventh floor of the Lotte World Tower in southern Seoul has chosen to display a retrospective of American minimalist artist Dan Flavin (1933-96), who is an important figure in art history, as its inaugural exhibition.

“These works show how he developed his ideas about working with materials and industrial objects,” said Courtney J. Martin, deputy director and chief curator of Dia Art Foundation. The New York-based foundation that supports contemporary art projects loaned the works by Flavin for this exhibition. 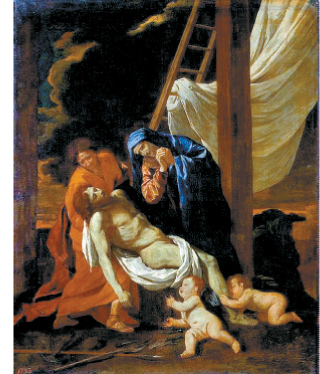 COLLECTION OF THE HERMITAGE: FROM CLASSICISM TO IMPRESSIONISM

To April 15: A vast French collection from the Hermitage Museum in St. Petersburg is being displayed at the National Museum of Korea. Some 89 paintings, sculptures and drawings by renowned French artists such as Nicolas Poussin, Jean-Auguste-Dominique Ingres, Claude Monet and Henri Rousseau are on display.

About 40 percent of the collections that came to Seoul are said to be personal collections of Ekaterina II, an empress of Russia, who built the Hermitage. The museum now holds the largest collection of French art outside of France.

To May 26: The SongEun Art and Cultural Foundation, which was set up by Samtan, will open a new museum in 2020 at the energy company’s new headquarters to be designed by Swiss architect team Herzog & de Meuron and built in the very heart of the Gangnam.

The site is just a 10-minute walk from the foundation’s existing gallery SongEun Art Space.

The second and third floors of a building that stands in the site, which will eventually become the company’s new headquarters, host a free exhibition.

The show features works by finalists and winners of the SongEun Art Award including Suki Seokyeong Kang, Donghyun Son and Choi Sun.

The exhibition is open from 2 p.m. to 7 p.m. from Thursdays to Saturdays.

Visits from Mondays to Wednesdays during the same hours are open only to groups of 10 people or more and a reservation is required at least one day ahead of time. The space is closed on Sundays.