In high-end TV war, Sony is catching up

In high-end TV war, Sony is catching up 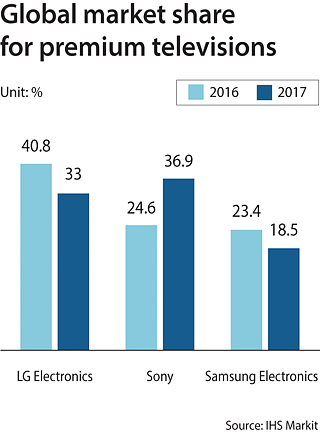 Sony is cornering the high-end television market and giving Korean competitors a run for their money.

The Japanese electronics maker claimed the top spot in the segment for televisions valued over $2,500, relegating LG and Samsung to second and third, according to data released by IHS Markit last week.

Considering Sony’s market share was at just 14.3 percent in 2015, the company has been on a fast track toward growth. In 2016, the company beat Samsung and last year surpassed LG, a formidable rival in OLED televisions.

Sony’s leap is largely credited to its OLED lineup. The company started mass-producing OLED televisions last year and focused on the high end only, solely making televisions over $2,500 to maximize profitability.

The lean strategy seems to have worked. When narrowing down the market to televisions over $3,000, Sony had a 44 percent share last year, according to IHS Markit, edging LG Electronics at 30.9 percent.

While Sony’s recent growth could be a threat to Korean electronics makers, LG and Samsung have different perspectives on the situation.

LG, in fact, seems rather content about Sony’s expansion since both companies are interested in proliferating OLED televisions. Sony is also a business partner of LG, sourcing OLED panels from LG Display.

Samsung, on the other hand, has reason to be concerned. Since the early 2010s, the company has shifted away from OLEDs and toward QLEDs - LCD panels applied with quantum-dot technology. Quantum dots are semiconductor nanocrystals that Samsung says enhances a television’s color definition.

The strategy, though, hasn’t worked well for Samsung. Operating profit at the company’s consumer electronics division has been on the decline largely due to sluggish sales of televisions.

Competition in the premium TV segment has been fierce not only because high-end TVs are more profitable but also because electronics makers participate with their best and latest technologies in the segment. Healthy sales of premium televisions also usually boost sales of lower-priced sets by the same manufacturer.

LG’s goal this year is to solidify OLED as the mainstream standard in the premium TV segment.

Since the displays’ organic light-emitting diodes are capable of emitting light on their own without a conventional backlighting system, OLED panels are usually thinner and more flexible in design compared to other types of displays, including QLEDs. LG plans to improve its production process to cut costs.

Samsung will likely compete with a two-track strategy, promoting its QLED lineup along with a new micro light-emitting diode television.

Micro LED is being spotlighted as a possible successor to OLED for its power efficiency. Samsung Electronics plans to unveil the new television as well as an upgraded QLED display at an event in New York on March 7.

As a new technology, mass production of micro LEDs remains costly and difficult, but Han Jong-hee, head of Samsung’s visual display business, told reporters last Thursday that the company will “begin sales of micro LED TVs from August this year.”

Han said the price will be in a range competitive in the market and projected a positive sales outlook.