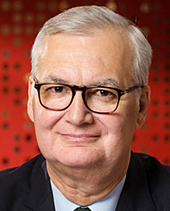 Samsung’s construction and trading arm Samsung C&T has nominated Philippe Cochet, former chief productivity officer of General Electric, to its board of directors in an attempt to enhance expertise and diversity.

Cochet will be the first non-Korean to sit on Samsung C&T’s board once his appointment is approved at a shareholders’ meeting this month. It is likely the meeting will take place on March 22, according to a company spokesperson. His term will last for three years.

The appointment follows Samsung Electronics’ decision last week to include Korean-American entrepreneur Jeong Kim, co-founder and executive chairman of Kiswe Mobile, on its board. In a bid to increase diversity, the electronics giant also named Kim Sun-uk, former President of Ewha Womans University, as an outside director.

Samsung C&T said it will continue adding more professional managers from global companies, as well as female executives, to its board.

On Wednesday the construction company also confirmed that Samsung C&T President and CEO Choi Chi-hun will be reappointed as chair of the board. As soon as his new term begins he will leave the role of CEO, likely handing it over to Lee Young-ho, currently the president of the company’s engineering and construction division.