‘Women should speak with one voice,’ says professor

‘Women should speak with one voice,’ says professor 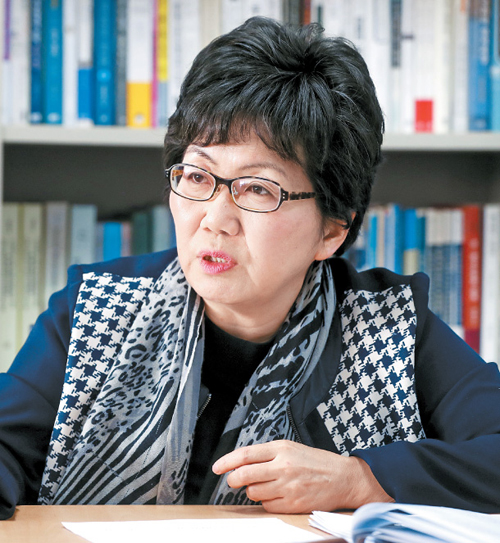 The Korean Me Too movement emerged in Korea on Jan. 26 after prosecutor Seo Ji-hyeon revealed that she was sexually harassed by a senior prosecutor in 2010. The movement’s focus shifted to the arts industry as several allegations about prominent playwright and theatrical director Lee Yoon-taek were made public. When Seo shared her story, many politicians and famous intellectuals denounced the prosecution. But when a person who is affiliated with the liberal camp was accused, those politicians and intellectuals expressed little reaction.

Jang Myung-sun, professor of Ewha Womans University’s Institute for Gender and Law, has been watching the situation carefully. She has been working for 10 years on gender issues. She recently sat down with the JoongAng Ilbo to discuss the Me Too movement.

Q. The Me Too campaign is getting bigger. It looks different, compared to similar revelations made two years ago. What do you think is the reason?

A. First of all, society has changed. Last year, feminism became a hot issue and even President Moon Jae-in declared himself a feminist. But sitting prosecutor Seo appeared on a TV news program and exposed sexual abuse in the prosecution. That was the biggest reason. It must be really hard to tell that kind of story as a sitting prosecutor. Seo even said it took her eight years to talk about this. She did this difficult disclosure on television, not radio, and showing her face made a huge impact.

Do you think the Me Too movement will continue to grow?

I think it’s 50/50. Of course, it’s important that people share similar experiences. But if we continue focusing on assailants, it will be difficult to keep spreading the movement. It must not end by accusing some assailants. We need “With You” so people can join with victims. If that does not follow, victims will be left behind as victims. This topic is a burning issue right now, but it won’t be a discussion topic any more if other huge news breaks out, such as North Korean nuclear news. With this opportunity, we should establish a legal system so that we can keep monitoring similar cases. Previously, when similar issues popped up, related institutes averted them and they disappeared.

The same concerns are here. Those sexual crimes triggered the Me Too movement because of Korea’s patriarchal culture. The culture should be changed. That requires more participation, no matter one’s gender. Now is the start of change. But we cannot force victims to come forward. Even as this movement is betting bigger and bigger, there are still so many who are not speaking up. It’s really difficult.

Some people blame the victims, calling them gold diggers or such. Such accusations make it harder to come forward. What do you think of that?

In most organizations, when victims accuse someone, the victim becomes an outsider and feels forced to leave. They do not check facts about the case and just insult and criticize the victims. When prosecutor Seo exposed her experience, she faced such things. The Equal Employment Opportunity Act was put into effect in 2017, but the law cannot stop everything. Now, the judicial branch should act correctly. But a severe punishment policy is not always the best option. I believe assailants who commit sexual crimes should be punished severely. After several severe punishments are handed down, the overall atmosphere will change. The judicial branch should self-reflect. The prosecutors and judges are male-dominated, powerful organizations and they should reform themselves.

Even though the number of female prosecutors and judges is increasing, why is the judicial branch not changing?

Female representation is still too low. I’ve seen an interview of an ambassador of the European Union who said her bosses for the last 12 years were women, but after her appointment as ambassador in Korea, all the Koreans she met in her first six months were all men. In reality, only 17 percent of the lawmakers are women. In the prosecution and courts, about 30 to 40 percent are women. But when it comes to high-ranking positions, the number decreases. If only men are holding hiring roles in higher positions, you cannot speak up as a woman.

It takes quite a long time for a victim to overcome fear and accuse the assailant. Because of that, some say the statute of limitations should be extended or terminated. What do you think about that?

There should be more research done on this issue, but lots of sexual crimes happen in situations of unequal power distribution between genders. We should consider terminating the statue of limitations for sexual crimes. In the case of murder, it has been terminated. If it is helpful to achieving gender equality in society, it is reasonable. Meaningful terms like “gender equality” should be included in the Constitution. Other advanced countries where gender equality has developed, such as Sweden, have such lines in their constitutions. It is commonly known that when gender equality is actually established in a country, the gross domestic product (GDP) increases. It makes both genders more comfortable and I do not see why we should not do this.

Lee Yoon-taek is a friend of President Moon Jae-in. That might be the reason officials at the Blue House and Do Jong-whan, minister of culture, sports and tourism, have remained silent about the Me Too campaign. What do you think?

High-ranking government officials must speak up about this issue. I do not think they have much courage. Everyone can make a mistake, but the problem is how they deal with it after it happens. They should talk about it first. The president should talk about this after these Me Too cases, in order to demonstrate his willingness to achieve gender equality.
What can be an effective method to pressure the government?

First of all, women should participate in the movement. However, women’s organizations are not raising their voices. The Korean Sexual Violence Relief Center and other organizations made announcements about it, but they didn’t get much attention. There are many reasons behind this. One of the reasons is that women’s organizations lost their sense of direction. When female-related cases arise, women should speak with the same voice, no matter their political views. But that did not happen.

Financial funds from governments can be causing the problem. If you are getting financial support from the government, it is harder to speak up. After all, they lost time reacting and did not unite as one on this issue.