Drills will be held in early April, says adviser

Drills will be held in early April, says adviser 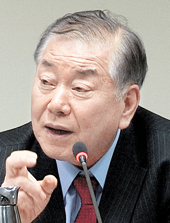 Military exercises postponed by South Korea and the United States will be held in the first week of April, a key adviser to President Moon Jae-in told a forum in Washington Tuesday, indicating a month-long window for Seoul to broker a meeting between Washington and Pyongyang.

“As far as I’m concerned,” said Moon Chung-in, presidential special adviser on national security, diplomacy and inter-Korean reunification, “South Korea and the U.S. have decided to resume their annual joint military exercises in the first week of April.

“Hopefully,” he continued, “the United States and North Korea will reach some sort of a compromise before that. I’m sure both will…There’s still a month left until then, so things can certainly change.”

Local analysts believe that Seoul’s “golden time” to get the countries together for dialogue will be before South Korea and the U.S. hold their spring exercises. Neither country has officially confirmed dates for them.

South Korea’s National Defense Minister Song Young-moo refused to deny or admit an April schedule for the joint exercises on Wednesday during a parliamentary briefing, saying the allies will jointly announce new dates “after March 18 and before April 1.”

In early January, the South Korea persuaded the Donald Trump administration to delay the annual Key Resolve and Foal Eagle exercises until after the Paralympics end on March 18, saying the decision was to ensure the safety and success of the PyeongChang Winter Games.

Analysts believed it was really a major concession to North Korea, which sees the military drills as a rehearsal for an invasion.

Last week, Defense Minister Song said the allies were planning to jointly announce a new schedule for the exercises soon after the Paralympics wrap up, denying accusations they were holding back a statement to mollify North Korea.

Moon Chung-in, a liberal scholar whose far-left comments have often invited angry backlash from conservative lawmakers and detractors of the Moon Blue House, also stressed South Korea’s “military authority” in Washington on Tuesday while discussing the country’s regaining of wartime operational control (Opcon) over its troops from the United States, saying the South Korean president had the power to kick out American soldiers stationed in the South if he wanted to.

“President Moon must be feeling like he’s walking on thin ice right now,” he said. “He’s taking everything carefully, going from maximum pressure to maximum prudence.”

The adviser expressed hopes for the resumption of denuclearization talks, saying North Korea showed a changed attitude when a recent high-level delegation visiting South Korea didn’t walk out when President Moon raised the subject of denuclearization during a meeting.

If the United States truly wants to denuclearize North Korea, Moon told the Washington forum, the Trump White House needs to refrain from castigating Pyongyang for its political system and human rights abuses.

Doing so would only make the North believe the U.S. was aiming at regime change, he said, and that denuclearization was a vehicle for that ultimate goal.

Trump is sending Secretary of Homeland Security Kirstjen Nielsen to lead the American delegation to the PyeongChang Paralympics opening ceremony on March 9, and she is expected to negotiate further with Seoul officials.