Knapper is cautious about talks

Knapper is cautious about talks 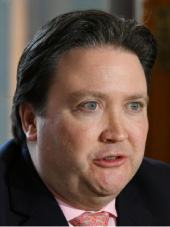 The United States does not want to have talks with North Korea if it seeks to use them as a means to buy time for further development of its nuclear and missile programs, its acting ambassador in South Korea said Wednesday.

Marc Knapper, charge d’affaires at the U.S. Embassy in central Seoul, said in a meeting with reporters that the North should show its willingness to use any opportunity for dialogue to make progress in its denuclearization.

“I think our position is…denuclearization is a precondition for talks. I think in other words, we need to see willingness on the part of North Korea,” he said. “We have seen enough times the North used dialogue with us and South Korea and others to continue to buy time to pursue nuclear and missile developments.”

He made the remarks at a time when the North recently said that it is willing to talk with the United States, raising speculation about if and when Washington and Pyongyang will gather to discuss the North Korean nuclear problem.

The U.S. Department of State earlier said that it will hold talks with North Korea only when the regime is ready to discuss its denuclearization.

Knapper said that there is a way open to the North if it is really willing to have serious discussion on its denuclearization.

Knapper also said that the top U.S. nuclear envoy’s planned retirement does not signify any change in its North Korea policy going forward.

Joseph Yun, U.S. special representative for North Korea policy, is retiring at the end of this week due to what the State Department said were personal reasons.

Yun is known for leaning toward dialogue with North Korea to resolve the current nuclear stalemate. His departure is sparking speculation that the United States might be adjusting its North Korea policy.

Knapper said that he knows there are such concerns being raised in South Korea and other countries but noted that it is far from the truth. He added that the United States’ North Korea policy will remain unchanged and its cooperation with South Korea will also stay firm.

“There have been some concerns raised in the Western press and the Korean press - somehow the departure reflects a change in the U.S. policy or somehow undermines U.S. efforts in our own state policy of the pressure campaign or our own close coordination with South Korea,” he said.

“Nothing could be further from the truth. Our policy remains the same. Our close coordination with South Korea continues, unabated, and we will continue to work very close with our Korean friends and allies here in Seoul, Washington and New York going forward without any change whatsoever,” he added.

Asked whether there is a possibility of South Korea and the United States further delaying their joint military exercises to keep the current peace mood intact, Knapper said the chances are none, adding that such drills are essential for the allies to maintain their deterrence capability against outside threats.

The annual drills, which are usually conducted in February and March, were postponed this year in a bid to ease tensions on the peninsula during the Feb. 9-25 PyeongChang Winter Olympics. North Korea condemns the exercises as an invasion rehearsal.

“There is no possibility for a delay. We are working closely with the [South] Korean government,” he said. “We will need our alliance to take necessary measures through exercises.”