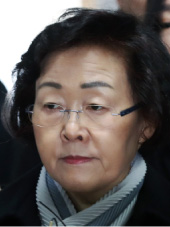 Shin Yeon-hee, the head of the Gangnam District Office of southern Seoul, was taken into custody on Wednesday for an investigation into her corruption allegations.

The Seoul Central District Court issued a warrant to detain Shin, who is suspected of embezzlement, abuse of power and solicitation during her tenure. “The prosecution presented sufficient grounds for her charges, and there is a concern that she may destroy evidence based on the circumstances shown,” said Judge Park Beom-seok.

Shin is suspected of embezzling about 93 million won ($85,858) from July 2010 to October 2015 from the district office’s budget, money that was earmarked for incentives and prize money for each department. She is accused of spending the money on private affairs such as alumni association membership fees, party membership fees, donations for politicians and cosmetics.

She is also suspected of forcing a businessman, who operates a medical foundation, to hire her brother-in-law. The company was commissioned by the district office in October 2012 to operate a hospital specializing in medical care services for the elderly.

Following an initial investigation, the police asked the prosecution earlier this month to seek a warrant to detain Shin. The prosecutors requested an additional probe, and the police complied. The warrant application was filed on Friday and the hearing took place on Wednesday.

Shin is a close associate of former President Lee Myung-bak. She served as the administrative director of the Seoul Metropolitan Government when Lee was serving as the mayor.

She retired from public service in January 2007. During the 2007 presidential election, she worked as a deputy head of Lee’s campaign in Seoul.

In 2010, she won the general election to become the head of one of Seoul’s wealthiest districts. She won reelection in 2014.

Throughout her political career, Shin made clear her opposition to Seoul Mayor Park Won-soon, a member of the liberal Democratic Party. Her first challenge to Park was over a development project of Guryong shanty town in Gangnam District in 2012.

In 2015, she also argued that the donation Hyundai Motor Group paid as a part of its development project in Samseong-dong must be used within the district. She even argued that the district should be separated from the rest of Seoul and become a special autonomous zone.

With Shin’s detention, her ambitious development projects of Guryong village and Yeongdong-daero underground complex are expected to face obstacles.

It is not the first criminal investigation against Shin. She was indicted in August 2017 on charges for slandering President Moon Jae-in, then presidential candidate of the Democratic Party, through 200 text messages from December 2016 to March 2017. The prosecution said at the time that she spread false, negative information about Moon to influence the election.

On Feb. 9, the Seoul Central District Court convicted her of violating a public servant’s duty to maintain political neutrality and undermining transparency and fairness of an election. The court ordered her to pay 8 million won, a punishment heavy enough for to lose her post if finalized. Shin appealed the conviction to a high court.

At the time, the prosecution asked the court to punish her with a one-year prison term, but the court did not jail her, saying that her action was not enough to influence the outcome of the presidential election. The recipients of her messages were all conservative voters anyway, and it is hard to see that their feeling toward Moon was changed by her messages, the court said at the time.

Shin posted about 200 messages on group chats, participated by up to 500 people, to criticize Moon. In some messages, she said Moon is a communist and has enormous slush funds.

Shin had argued for freedom of speech.