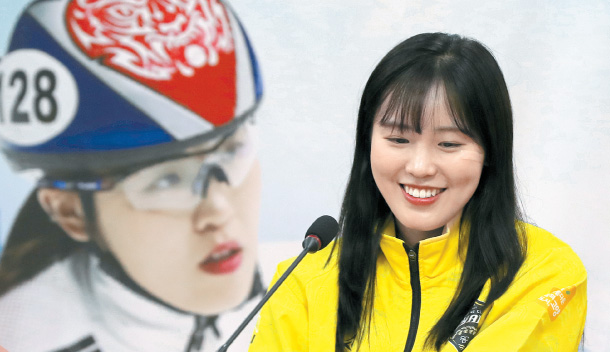 Kim A-lang may not have medaled in any of the individual races in short track at the PyeongChang Olympics, but she did win the hearts of short-track fans thanks to her big smile.

Though she won gold in the women’s 3,000-meter relay at the 2014 Sochi Olympics, she barely received any recognition. Over the next four years, her light slowly faded and by the time she was named as a member of the women’s short-track team for the 2018 Games, few knew who she was.

But that changed at PyeongChang, when Kim once again won the relay and earned recognition among fans.

“I’ve never had this many people recognize me,” Kim said. “It wasn’t like this after the Sochi Olympics in 2014.”

Kim started to receive attention on Feb. 17, during the women’s 1,500-meter race. When her name was called at the start line, she stood out from all the other nervous-looking skaters with a calm, warm smile.

“I made eye contact with my coach,” Kim said. “He nodded at me and that just made me feel comfortable. And it just made me smile.”

In addition to her smile, she was spotted wearing a Band-Aid on her right cheek. During a race in January 2017, Kim was cut deeply by another racer’s blade right under her left eye.

But rather than getting discouraged about her injury, Kim remained positive, saying, “I’m very lucky because my face doesn’t affect my race at all. To me, my legs are more important than my face.”

Though she finished fourth in the 1,500-meter final, she skated straight over to Choi Min-jeong to celebrate her victory and fans gave Kim a big round of applause.

“A lot of people were disappointed about my fourth-place finish, but I was satisfied,” Kim said. “I was very happy to see Min-jeong win gold.”

But that doesn’t mean Kim is without ambition. Like any other athlete, she trains and works hard to win. In her first Olympics in 2014, she had acute indigestion right before her 1,500-meter race, which led her to disqualification.

“Since the food didn’t suit my taste, I had a lot of raw carrots,” Kim said. “And it may have been the nerves, but since I’d been continuously throwing up, I had no energy during the race.”

Kim hasn’t touched carrots since. Once she headed to the Gangneung Olympic Village in Gangwon, she went on a strict diet to avoid making the same mistake.

“My diet consisted mainly of soup, rice and simple side dishes,” Kim said. “I completely avoided cold or raw dishes. I had the exact same menu for three days.”

Due to the cold weather in Gangwon, catching a cold was another concern. Once she returned to her apartment, she soaked all the towels and hung them around the room to boost the humidity. On days when she was too tired from a race, she just sprayed water on the floor.

It’s only been few days since the Olympics ended, but Kim is already looking forward to the Beijing Games, four years from now. Since Jan. 1, Kim has been keeping an “Olympic Diary,” which includes a detailed training log.

“Memories from the Sochi Olympics four years ago are now blurred, so I was very disappointed when it came to preparing for the PyeongChang Olympics,” Kim said. “I’m writing as much detail as possible this time so it can help athletes who will compete at the next Olympics.”

But Kim made it clear that she won’t publish her diary as a book, since she doesn’t want athletes from other countries to profit from her tips.

At Beijing, it’s likely that the Chinese skaters will be even tougher than they were at PyeongChang, as the women’s team ended with zero medals due to continuous penalizations. Chinese short-track fans expressed their anger on the internet, making comments such as, “We’ll see you in four years at Beijing.”

“There’re nothing we can do,” Kim said. “We’ll get even better so we are way ahead of them. We’ll gain more muscle so we don’t get behind.”