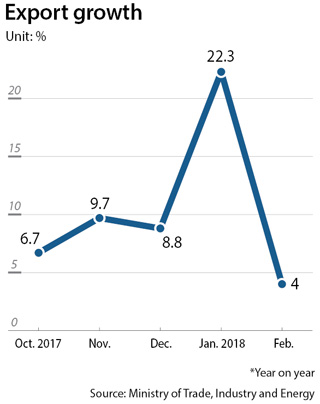 Outbound shipments reached $44.88 billion during the month, up from $43.16 billion a year ago, according to data compiled by the Ministry of Trade, Industry and Energy.

Exports rose for a 16th consecutive month, but the numbers were affected by a four-day holiday in Korea as well as people taking days off in China to celebrate the Lunar New Year.

Korea’s trade surplus came to $3.31 billion, marking 73 straight months in which the country’s exports have exceeded imports, the ministry said.

“Despite fewer working days and a high base effect, Korea’s exports increased in February to maintain an upward trend,” the ministry said in a release. “Strong demand for memory chips and increased prices of petroleum products were among the main contributors of the export growth.”

Shipments of semiconductors soared 40.8 percent to $9 billion, a monthly record, on brisk sales of high-value memory chips and storage devices. Petroleum products rose a solid 15.8 percent as a rally in oil prices boosted their sale prices.

In contrast, sales of automobiles dropped 14.4 percent on sluggish performance in the United States, and steel fell 9.7 percent due to weak demand in China.

Shipments to the United States backtracked 10.7 percent due to downbeat sales of cars and wireless communication equipment. Korea’s trade surplus with the United States tumbled 76.9 percent to $360 million in February, the ministry noted.

The ministry said global economic recovery and high prices of major export items will create a favorable environment for Korean exporters, but cautioned over rising protectionism in major economies and the potential impact of U.S. interest rate hikes this year.

The Seoul government pledged to drum up support for local companies, to tackle trade barriers and expand their foothold in the global market.

“We will come up with proactive measures to deal with downward risks to keep up with the upward trend in exports,” Paik Un-gyu, minister of trade, industry and energy, said in the release.