BTS named Musician of the Year at KMAs

BTS named Musician of the Year at KMAs 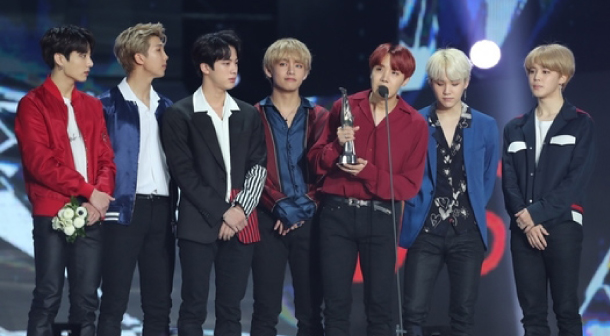 K-pop group BTS on Wednesday won the Musician of the Year award at the 2018 Korean Music Awards (KMA), an independent music award show that focuses on both mainstream and genre music by Korean artists.

The seven-piece boy band last year released its fifth EP album, “Love Yourself: Her,” which sold over 1.58 million copies to become the highest-selling album in Korea in 16 years, after idol group g.o.d’s fourth studio album in 2001.

BTS has also enjoyed massive success overseas, with two tracks from the album - “DNA” and “Mic Drop” - charting on the Billboard Hot 100 chart and being certified “gold” by the Recording Industry Association of America.

Song of the Year was awarded to “Tomboy” by Hyukoh, after a five-way competition between Red Velvet’s “Red Flavor,” “DNA” by BTS, “Through the Night” by IU and “We Are” by hip hop artist Woo Won-jae. Album of the Year award was handed to indie folk artist Kang Tae-gu for his second studio album, “bleu.”

KMA was formed in 2004 by a group of music critics, reporters, radio producers and cultural scholars as an alternative to big awards run by the country’s three major TV networks - KBS, MBC and SBS - whose fairness had been called into question. Yonhap