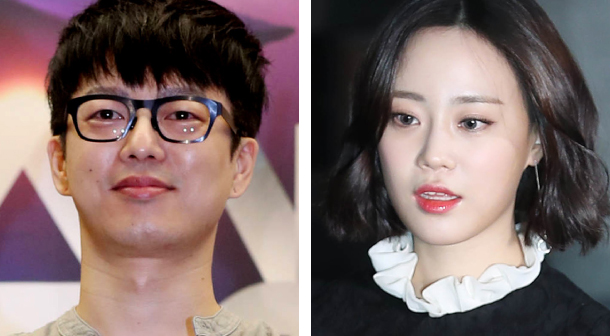 Singer Ha Hyun-woo, left, from rock band Guckkasten and Hur Young-ji from now-disbanded girl group Kara both confirmed on Thursday afternoon that they started dating a month ago.

The two got closer after they appeared on a variety show on cable channel tvN last year, and started calling each other “lovers” in February, according to an industry insider.

Since Ha is 13 years older than Hur, the couple is said to have immediately told each others’ families of their relationship. “Everyone has given them their blessing, as both of them have really warm hearts,” said the insider.

“The two people are in love. We hope you support their relationship,” said Ha’s agency Interpark Entertainment.

Ha debuted as part of the four-member band Guckkasten in 2008, and has been flaunting his vocal skills ever since. He also performed in the opening ceremony of the 2018 PyeongChang Winter Olympics.

Hur joined girl group Kara in 2014, and has been pursuing a career in acting and entertainment since the group disbanded in 2016.