The area around Konkuk University (often referred to as Kondae in Korean) has long been a hot spot for young people to hang out with its cheap and delicious food options and attractions to enjoy on the weekend, but more recently, the neighborhood around the station has grown to become a bubbling cultural hub that is almost always full of people any day of the week. One of the biggest draws in recent years has been the Common Ground shopping center, but there are also other entertaining places to stop by for those looking for fun without having to break the bank.

Before getting to Konkuk University Station, get off at Children’s Grand Park Station on line No. 7. Get out at exit 1, where you will face the main gate of the Seoul Children’s Grand Park. Don’t be fooled by the name - the park can be enjoyed by children and adults alike, mostly for free! The park is home to a zoo, a botanical garden, snack shops, animal shows, and daily events to entertain families.

Although the majority of cultural events have been temporarily halted because of winter, as the weather warms up, look for attractions to be opening their doors again soon.

When entering the main gate, the first spot that you will see is the Junk Art Village. Established in 2012, workers from the park collected trash to create sculptures of popular movie characters and animals for people to enjoy. The village is truly a sight to see, as a closer look at each of the sculptures reveals easy-to-recognize recycled goods.

After a look in the Junk Art Village, head to the botanical garden. The garden felt more like a jungle to this reporter, and she enjoyed walking through the grassy landscape. After touring the garden, head to the zoo. You may be surprised by the variety of animals at the free zoo, which includes leopards, jaguars, Asiatic black bears, red foxes, spotted hyenas, monkeys, parrots and many more.

After the stroll around the park, head towards Hwayang Jeil traditional market, home to many varieties of street food, to replenish your empty stomach. Although there are many options to choose from, including hot dogs, fish-shaped red bean snacks, tteokbokki (spicy rice cakes), fish cakes and more, this reporter decided to head towards Myeongdong Bunsik. Although the restaurant is rather cramped, the sight of fat dumplings streaming wonderfully at the front of the store would stop anyone in their tracks and lure them inside. And the prices are cheap too. All dumplings cost 3,000 won for 10 pieces, and the eatery sells other dishes as well, such as tteokbokki, fish cakes, ramen, and dumpling soup.

After filling your stomach with dumplings, you may need a cup of coffee to keep yourself going for the rest of the day. If you want a good quality coffee for an affordable price, go to John & Jill takeout coffee shop which is located not far off from the market. Since it is a takeout shop, the coffee prices are not outrageously expensive, with an Americano costing only 2,000 won. The most expensive item on the menu were the signature coffees, which the barista recommends if you don’t know what to drink. This reporter was quite thirsty after the fried dumplings, so she decided to go for a canned latte, which cost 3,500 won. This takeout shop sells its coffees in cans, so customers can enjoy their drinks later.

Inside the boxes are specialty shops and exhibitions sure to entertain any visitor for hours. Most interesting about this cultural center is that no popular brands or franchises can be found. Instead, a collection of unique brands, start-up shops, small-scale enterprises and social enterprises appealing to young people are clustered around throughout the shopping center, and the project stores and exhibitions change on regular basis.

Although there aren’t any interesting exhibitions currently ongoing, one project store which caught this reporter’s eye was Come & Visit My Room. Inside the space, you are instantly surrounded by bright colors and patterns on pillows, blankets, curtains, notebooks, posters and more. The multi-colored items will surely brighten up the atmosphere of anyone’s home.

Another interesting discovery was a bookstore and poster shop that was hidden in the corner of the third floor by the Abiko curry restaurant. The entrance of the store reminded the reporter of an attic, but inside the secret little entrance was a bookstore called Index. Looking through the books, it is easy to tell that this is no ordinary bookstore. Many book series that this writer has never seen in large bookstores filled the bookcases, and were categorized under unique topics instead of genres, such as B for “Beer & Alcohol,” C for “Coffee & Tea” and M for “Memories.” Not one book is added to the shelves of Index without a reason, and the books are collected and displayed in the store in an effort to raise questions or create conversations to the world. The rare arrangement of books with colorful covers make it irresistible to pluck a book from one of the bookcases, even for those who are not big readers.

On the second floor, a variety of flamboyant posters cover the walls, featuring interesting quotes such as “I won’t be knitting by the fire while I have men fight for me,” or “And the one [crossed out two] lived happily ever after.” Although one can only go up after they either purchase a cup of coffee or a book in the store, there is also a long table and two or three round tables for reading if one wants to settle down for a closer look at a book from the shelf. The posters are all for sale. 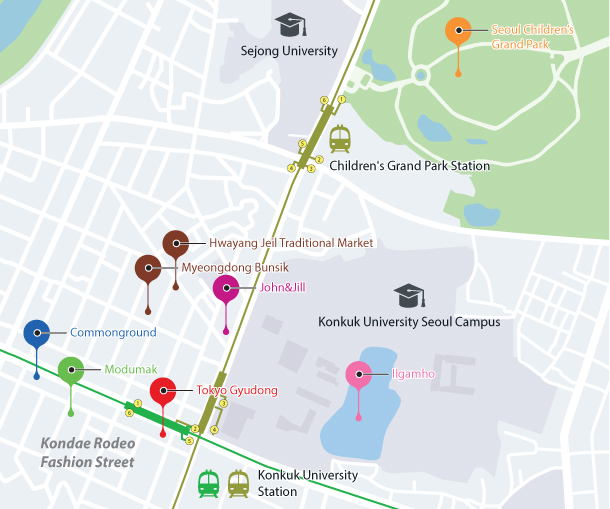 After some reading, drop by Modumak, a novelty cafe designed to allow people to entertain themselves. The cost is 6,000 won per person for 90 minutes, and you can get an additional 30 minutes for free on weekdays if you post a picture of Modumak with a hashtag on social media.

When you enter the cafe, the brightly colored blinking lights that cover the ceilings and the walls greet you, creating a relaxing mood inside of the space.

Take off your shoes, grab a spot in one of the many rooms, and enjoy yourself with the multitude of activities that are available. The whole cafe is designed to make people feel like they are playing in an attic, and there’s a whole bunch of things such as board games, a mini pool table, ice hockey, arcade games, nail polish and photo zones for guests to enjoy while they are there.

This reporter instantly wished that she had brought some friends along, as all the games are for more than two people. There were many couples and groups of friends hanging out and enjoying themselves. Carbonated drinks are free, and one warm cup of coffee is on the house.

After having some fun, this reporter headed off to enjoy some dinner, at a tiny place about a 10-minute walking distance from the Modumak. This restaurant sells gyudong, a Japanese-style rice bowl with beef on top. The prices are surprisingly low, too, with a bowl of basic gyudong available for 5,300 won. The place also sells different types of donburi, another rice bowl dish consisting of fish, meat, vegetables and other ingredients simmered together; udon, a thick wheat noodle; and curry.

Although the restaurant is small, every customer comes in after they place their order on the machine that stands right outside the door, so it quickly gets quite cozy instead of feeling cramped.

This reporter grabbed a stool and dug into her dish. The bowl was hot and the meat was soft enough to swallow without chewing.

After you’ve filled up your stomach, walk to the final destination of this cultural expedition - the big lake by the Konkuk University campus. The lake, known as Ilgamho, is a 10-minute walk from the restaurant.

The enormous lake is often said to be big enough to sink an entire university building and students at Konkuk are known to complain about the lake being a major inconvenience, as they have to walk around the lake to reach some buildings on campus.

Although the lake was almost totally frozen solid when this reporter arrived, it still offered an incredible view.

Among Seoulites, the night view of the lake is said to be one of the most beautiful sights in the city, with the lights of the campus being reflected off the surface of the lake. There’s even a fun myth that if you walk around the lake three times with a person you like, you will eventually become a couple - so, bring a special someone along with you for an evening stroll, and enjoy!