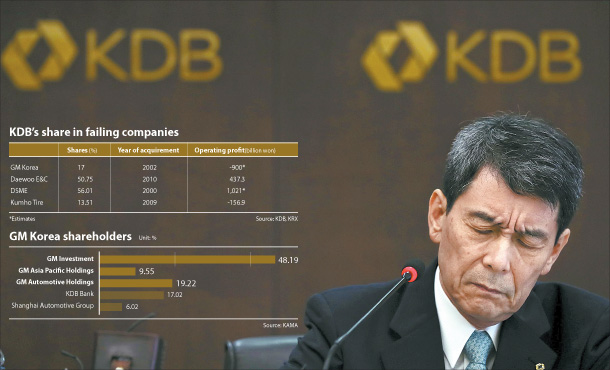 KDB CEO Lee Dong-gull appears at his first press conference in September last year after he was appointed to the current position by the Moon Jae-in government. [YONHAP]

The Korea Development Bank is facing a rising tide of criticism following a string of missteps including the botched sale of Daewoo E&C, the mishandling of GM Korea and the breakdown of negotiations with Kumho Tire.

The current situation at these debt-ridden companies, all of which have KDB as either a major shareholder or creditor, is reminiscent of the Daewoo Shipbuilding and Marine Engineering debacle two years ago that ultimately required a substantial government bailout. Some analysts are beginning to question the state-owned bank’s ability to handle major corporate restructuring.

KDB is even being blamed for causing air pollution by financing thermal power plants that run on coal.

There have already been several petitions posted on the Blue House website to hold KDB accountable for the GM crisis, although they mostly have less than 20 signatures.

There are also movements in political circles. The minority Party for Democracy and Peace plans to sue the state-run bank for failing to oversee and prevent the situation from escalating to its current state, as the second-largest stakeholder of GM Korea.

Even President Moon Jae-in’s own party has joined in.

“It is a problem that the KDB has failed to properly grasp the situation although the GM crisis has been in progress for a long time,” said Hong Ihk-pyo of the ruling Democratic Party, who is on the National Assembly’s Trade, Industry, Energy, SMEs and Startups Committee.

Not entirely to blame

One of the key criticisms against the KDB is that it didn’t appear to have proactively taken steps to prevent the GM Korea situation from escalating despite being the second-largest stakeholder with 17 percent and having three of its own appointees on the automotive company’s board.

GM Korea’s current struggles didn’t come out of nowhere. The company’s losses have piled up to 1.27 trillion won ($1.16 billion) in operating losses with net losses amounting to nearly 2 trillion won between 2014 and 2016.

The bank has also been criticized for letting its veto rights expire last year.

When GM took over ailing Korean automotive company Daewoo in 2002, KDB signed an agreement that gave it a 15-year veto over major management decisions that was seen as instrumental in preventing GM from taking drastic measures such as withdrawing from the Korean market or selling assets without the approval of KDB.

But as that veto expired in October last year, the last obstacle preventing GM from pulling out of the country was lifted.

GM Korea isn’t the only company that KDB has been accused of mishandling.

Less than a week before GM Korea announced that it was closing its plant in Gunsan, North Jeolla, KDB also came under attack when Hoban Construction, the preferred bidder for Daewoo E&C, decided to walk away from its 1.6 trillion won bid for the construction firm.

Hoban Construction’s sudden withdrawal from the bid was largely due to the 308.4 billion won in losses incurred by Daewoo E&C’s power plant project near Safi, Morocco. The losses were discovered during due diligence.

“We took the unexpected losses and other recent problems seriously and questioned whether we could take on the risks associated with them,” a Hoban representative said.

The Morocco power plant losses also came as a surprise to KDB, which is the main creditor of Daewoo E&C.

KDB claimed that while it was expecting a loss from the construction company’s overseas business, it had no way of knowing the exact figure until Daewoo E&C announced its fourth quarter report. The report had not been issued when Hoban Construction was chosen as the preferred bidder.

After taking over the 37.16 percent stake in the construction firm from Kumho Asiana Group in 2010, KDB has invested a total of 3.2 trillion won including the 2.2 trillion won it spent buying the initial stake.

Selling the company for 1.6 trillion won would be recouping only half of its investment.

Last year KDB also failed to sell off Kumho Tire, which is currently under negotiations on whether to go into court receivership.

Kumho Tire was on the verge of being sold to China’s Doublestar Tire last year, but negotiations fell through due to growing concerns over selling Korea’s No. 2 tire manufacturer to a much smaller Chinese company, which could result in massive layoffs and a loss of Korea’s leading tire technology to a foreign company.

The Kumho Tire sale was also accused of being rushed.

During the National Assembly’s audit of the state-owned bank over GM Korea’s expanding losses, KDB argued that it wasn’t able to flex its rights as the second-largest stakeholder of GM Korea because of a lack of cooperation from GM and GM Korea.

According to KDB, it requested 116 sensitive financial information documents from GM Korea in March last year but only received six.

Additionally, while three of the 10 board members on GM Korea are assigned by KDB, they didn’t practically have much power as they lacked a majority vote.

“Being a majority shareholder doesn’t mean you have access to inside information,” said Park Rae-soo, a professor at Sookmyung Women’s University. “Such a privilege is only available when the shareholder is also an executive.”

Park said one of the problems that KDB faces is attempting to be both a creditor and major shareholder of GM Korea and other struggling companies because of the debt-equity swap.

“Trying to be both the creditor and the shareholder is a really difficult task,” Park said.

Yet Park believes KDB deserves to be criticized for the mistakes it has made.

Some market industry insiders claim that the current GM crisis is not entirely KDB’s fault, but rather the result of a change in the attitude of the U.S. government toward its trading partners.

“U.S. President Donald Trump has been pushing forward the interests of the U.S. automotive industry,” said Lee Sang-hyun, an analyst at IBK Investment & Securities. “Currently Korea and the U.S. are renegotiating the bilateral trade agreement and Trump has mentioned a reciprocal tax in relations to the U.S. trade deficit. [The GM negotiations] seem to reflect the larger trade pressure [against Korea].”

The KDB wasn’t created solely to lead corporate restructuring. In fact, the law states that the purpose of creating the state-owned bank is to contribute to the healthy development of the public’s economy and the local financial industry by supplying and managing the necessary capital to promote sustainable growth.

The role of lead creditor and major stakeholder of struggling companies only came about after the 1997 Asian financial crisis.

Prior to the crisis, the KDB financed major industries such as heavy-chemical companies and exporters and expanded to those that later became the central pillars of Korea’s growth such as automobiles, electronics and semiconductors.

“Today KDB is like the holding company of those that are almost impossible to turn around,” said Sung Tae-yoon, an economics professor at Yonsei University. “The problem is that KDB takes over such companies without a grand plan of how or when to turn them around and sell them off at a higher value to another buyer. By leaving the companies as they are, the situation only gets worse.”

“The problem is with bureaucracy, no one wants to get their hands dirty,” Sung said.

Some in the industry have frequently raised the need to increase the independence of KDB to allow it to do more to improve these companies and make them more appealing.

However, others argue that the situation isn’t that simple, since the restructuring of major companies like GM Korea, Kumho Tire and DSME involves political factors including regional economies, which can’t be resolved by simply applying free market economics.

Since the debacle with DSME the KDB has been trying to step back from its role as the go-to financial company for turning debt-ridden businesses around.

In fact, former scholar-turned-KDB CEO Lee Dong-gull emphasized the bank’s role in contributing to finding and financing innovative companies during a speech at the beginning of the year.

“KDB has to support innovative growth with the attitude of finding new roads while overcoming difficulties so that the Korean economy can strengthen its key capacity to the global level through the success of the fourth industrial revolution,” Lee said.

This was a stark contrast from a year ago, when his successor made the success of corporate restructuring the key point of his speech.

Even the government supports changing the role of the KDB.

He said the problem of past restructuring was that it was too focused on countering the situation after the insolvency had already peaked, and trying to solve financial problems like massive amounts of debt.

The government is especially keen to cut down on the amount of taxpayer money that is pumped into debt-ridden companies.

“In the future [the government] will regularly inspect the situation of major industries and the competitiveness as a move to prevent the insolvencies preemptively. And we also plan on letting the market lead the restructuring of insolvent companies rather than state-owned banks,” Kim said.

Most of these companies were SMEs.

Industry experts say changes in the KDB will not come immediately, but in the long haul it needs to move the restructuring of insolvent companies to the private sector.

As the Korean economy has expanded so much since the KDB was founded in 1954, past practices of letting the state-run bank take the lead in corporate restructuring are no longer effective in this considerably more complex economic environment.

“The only problem is that private commercial banks are unlikely to take up the mantle as they, who are facing their own problems, will be reluctant to invest in projects that they deem as unprofitable,” said Park. “But eventually the restructuring of insolvent companies will have to be transferred to the private sector while KDB emphasizes its role of providing funding for potentially innovative companies that are actually in need of investment.”