Me Too hits activists, too

Me Too hits activists, too 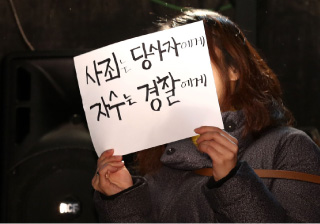 In 2000, a 100-member committee to eradicate sexual misconduct in the activist community was formed. The purpose was to investigate such practices within the progressive community of activists. In late 2000 and February 2001, some 10 assaulters were named, which included an executive member of a union at a broadcaster. He sued the victim and the committee for defamation.

Jun Hee-gyeong was the activist who was sued, and in her book “Rewriting Sexual Violence,” she wrote, “The assaulter is walking the streets freely with no repentance or apology and without being punished. I submitted a petition to the president of the broadcasting station as a last resort, but it was not accepted.” She was angry and agonized over the case, which was closed without being resolved.

Five years later, she dug into the patriarchal system of the progressive camp further in her book, “We Don’t Need a Big Brother.” Sexual violence was one of the topics in the work. “Violence against women exists everywhere gender-power dynamics work, but it needs to be analyzed how the activist community has a unique rhetoric and system of condoning, covering up and reproducing sexual violence internally.

“By covering up and condoning incidents, there is a unique mechanism of defending assaulters and pushing victims out of the community as a result.”

She claims that excuses like “She wanted it,” “I was too drunk and can’t remember” and “It wasn’t intentional” are common. She claims incidents are covered up to protect the greater cause of the organizations from crises.

“The victim is controlled by the masterminds,” she writes, “and sexual violence is used as an excuse in the power struggle among men. It is not perceived as a human rights violation.” She argues that organizations fighting for progressive causes keep sexual violence from being exposed outside of the organizations to protect themselves from attack.

Incidents are resolved by isolating the victim or forcing the victim to forgive the assaulter. Jun writes, “While it may seem like a gender-neutral attempt to preserve the organization by sacrificing an individual, the sacrificed individual is always a woman.”

The research was conducted more than 10 years ago, and the progressives are not the only ones tainted by such allegations. Kim Eo-jun said opponents see the Me Too movement as an opportunity to divide liberal supporters of the Moon Jae-in administration. Minjoo Party lawmaker Keum Tae-seob said the rights of the victims are unrelated to political affiliation.

*The author is a political news editor of the JoongAng Sunday.