How Renault got out of its crisis

How Renault got out of its crisis 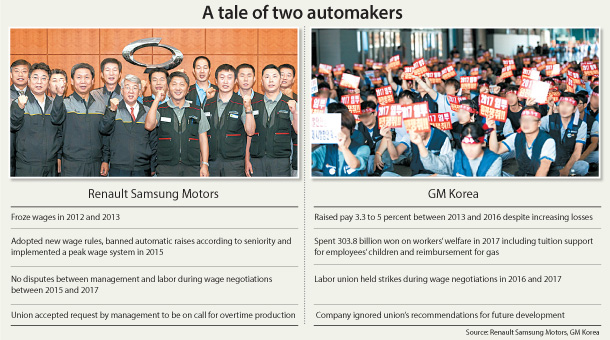 The crisis that GM Korea faces today is reminiscent of the ordeal that Renault Samsung Motors confronted five years ago.

In terms of production volume, Renault Samsung Motors ranked 13th among Renault’s 19 plants around the world, and the company had to lay off 800 workers. Rumors spread that Renault might pull its production line out of Korea.

But unlike GM, which today finds itself on the precipice of exiting Korea, Renault turned crisis into opportunity. It injected money into the Korean factory and tasked the plant with production of the Nissan Rogue.

The efforts significantly turned around the Korean operation. In the first half of last year, the Rogue was the best-selling sport utility vehicle in North America.

But all this was only possible through cooperation between the company’s management and labor union. When Renault Samsung Motors found itself in dire financial straits between 2012 and 2013, the union agreed to a wage freeze.

In 2015, both sides also agreed to change the wage system, eliminating automatic pay raises based on seniority and adopting a so-called peak wage system in which employees close to retirement can continue working but at a lower salary.

The union also actively responded to the company’s requests to be on call in case there was any additional production that was not previously planned.

Such cooperation helped the company’s Busan plant rank No. 1 within the Renault Group in just three years and led to further production at the factory.

Despite the company suffering losses, between 2013 and 2016 workers’ wages have increased between 3 and 5.5 percent every year, and they have each taken home roughly 10 million won ($9,200) in annual bonuses.

But the labor union is not entirely to blame. GM Korea’s management has also been criticized for ending wage negotiations quickly without providing any plans for the company’s future development.

With continuous disputes between labor and management, the factory’s productivity in Gunsan, North Jeolla, has worsened and resulted in failure to win production of new and popular cars.

“The labor union at Renault Samsung Motors quickly recognized the crisis they were in and was able to turn it around by reaching an agreement, whereas GM Korea has shown no sign of such efforts,” said Kim Soo-wook, a professor of operations management at Seoul National University. “It’s concerning how rather than trying to find a point of agreement through negotiation, [management and labor] are demanding government efforts [to resolve the situation].”

In a meeting with Korean Vice Finance Minister Ko Hyoung-kwon late last month, Barry Engle, an executive vice president at GM, requested government support including tax benefits and a debt-equity swap to keep GM Korea going. The government will decide on any support after an independent auditor examines GM Korea’s financial health, which is expected to take at least two months.

But labor-management relations are expected to be central in determining the fate of GM’s Korean operation.

If both sides can find common ground and resolve their differences, GM Korea might be able to land new SUV and CRV production.

If not, headquarters can refuse to commission projects to the Korean lines on the basis of low productivity.