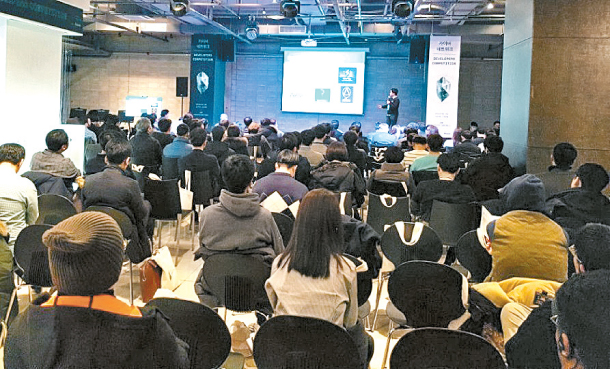 Developers attend a blockchain seminar hosted by Singaporean cryptocurrency exchange Kyber Network in southern Seoul on Jan. 20. The seminar was followed by presentations from five Korean start-ups who presented their projects to developers. [PARK SU-RYON]

Tech-savvy Koreans in their 20s and 30s are increasingly turning to blockchain to bypass the privacy and financial restrictions they regularly encounter online.

International blockchain pioneers now frequent the country to give presentations at conferences in Seoul.

“Every time I come to Korea, I can sense there are more developers leaping into the world of blockchain,” remarked Loi Luu, CEO of Singaporean-based cryptocurrency exchange Kyber Network, who hosted one such seminar in Gangnam district on Jan. 20.

“Sharing security information through collective intelligence and rewarding these activities with coins in a blockchain ecosystem is more efficient in facing digital security threats,” said Patrick Kim, co-founder of the Uppsala Foundation. Kim, who previously worked for a British security tech company, launched the start-up in Singapore to develop a security solution for cryptocurrency assets.

Besides attending conferences, programmers interested in blockchain also try to form lasting connections with each other by participating in common-interest groups and researching the new technology together. Yonsei University engineering students got in the game early in February, when they formed YBL, or Yonsei Blockchain Lab.

“Research [on blockchain] among university students is active in the United States and China, but we are just beginning now,” explained the group’s founder Lee Hyun-jae, a 23-year-old sophomore majoring in electrical engineering. “We plan to debate the future of blockchain by meeting up with world-famous founders of blockchain companies who visit Seoul.”

Blockchain enthusiasts argue that blockchain-based cryptocurrencies are the way to overcome the limits of the digital economy. These young advocates bemoan how the openness that characterized the early Internet age is now gone, replaced by closed markets of information and technology monopolization by tech giants like Google, Facebook and Amazon.

“Google and Naver have become so big that they monopolize each country’s market,” said CEO Charles Pyo of Chain Partners, a blockchain company builder that nurtures new start-ups. Pyo is skeptical of the current digital economy where institutional middlemen like banks and portals pocket large service charges.

“There is a saying that even smart people become fools once they enter Google,” said Uppsala co-founder Park Hae-min. “A blockchain system where individuals are rewarded with cryptocurrency or crypto assets for their skills will last longer than the current digital economy.”

They are counting on blockchain to succeed shareholder capitalism as the leading model of investment.

“The current model does not reward consumers who used a business’ products and services in their early days,” explained Kim Seo-joon, who founded the blockchain investment fund Hashed last year. “The lives of Uber taxi drivers remain the same even if the value of Uber reaches trillions of won. Also, not a single CD is given to fans who cheered a K-pop singer in his or her obscurity, with most of the profits going to entertainment agencies.”

He continued, “A fair model is one which gives early adopters the opportunity to become shareholders and rewards them for demonstrating confidence in new products.”

Initial Coin Offerings, or ICOs, are the new form of fund procurement that aims to achieve just this.

New cryptocurrency ventures use ICOs to raise capital by issuing their own coins instead of issuing stocks or obtaining seed money.

ICOs are regarded as a refreshing method of crowdsourcing where companies can get financed by anyone in the world, as opposed to conventional forms of fund procurement which requires conducting protracted negotiations and giving up large shares to venture capitalists.

To the frustration of Korean blockchain supporters, ICOs have been technically banned in Korea since September 2017, when the country’s Financial Services Commission prohibited all forms of blockchain funding “regardless of their technical terminology.” While the practice is not outlawed in the United States, some states heavily regulate the process by requiring ICO issuers to register with the Securities and Exchange Commission.

To date, hundreds of millions of dollars have been procured through ICOs worldwide, showing great potential. Protocol Labs, an American blockchain company, put their self-developed cryptocurrency Filecoin up for sale and amassed $257 million last year, the most funds procured by a company via an IOC in 2017. Protocol Labs is pushing for a decentralized storage network project that allows users to trade leftover storage on their personal computers for legal tender or cryptocurrency.

“Young people who don’t want to rely on the good will of data-monopolizing IT giants and the impartiality of the government as the middleman sympathize with blockchain,” explained Choi Bae-geun, an economics professor at Konkuk University.

As ICOs gain more publicity, scams are on the rise as well. Tech-savvy swindlers only have to make websites to lure investors to fund their fictional projects, promising them that the coins and tokens they issue will jump in value a couple of months later.

Given the high risks and potential of ICOs, industry experts are pushing for their legalization. Don Tapscott, the best-selling Canadian author of “Blockchain Revolution” and “Wikinomics,” visited Seoul for a blockchain conference at the start of the year.

“ICOs are a great way to procure funds for start-ups,” Tapscott told the audience in Korea. “Though some ICOs may be scams and fail, companies that receive investments from venture capitalists can also fail.”

Some critics are still concerned about ICOs given the volatility of cryptocurrencies. “If the value of funds amassed through ICOs fluctuate wildly,” assessed Kim Young-sik, an economics professor at Seoul National University, “it may not be a sustainable way of raising funds.”