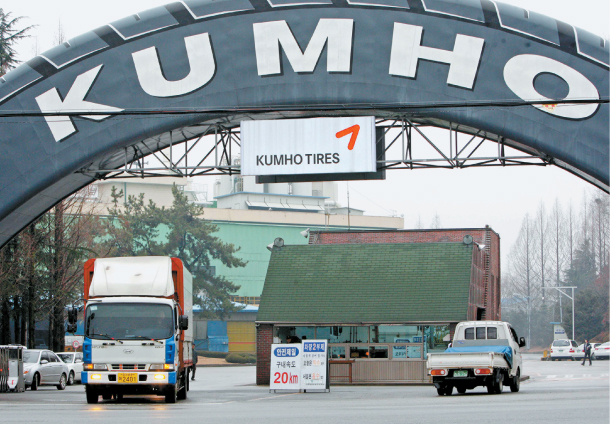 The entrance of Kumho Tire’s factory in Gwangju, South Jeolla. Creditors of the debt-ridden tiremaker announced on Friday that they would enter negotiations with Doublestar for a second attempt at selling the company. [YONHAP]

Creditors of Kumho Tire led by Korea Development Bank have decided to resume negotiations to sell the cash-strapped tire company to China’s Doublestar after the first sale attempt fell through last September.

The state-owned policy bank said in a statement Friday that it expects Doublestar to spend 646.3 billion won ($601 million) on a 45 percent stake in Kumho Tire, currently the world’s 14th largest tire company. The acquisition would occur through the issuance of new stocks priced at 5,000 won each, compared to the Friday closing price of 5,210 won.

The investment will reduce the creditors’ stake to 23.1 percent from 42 percent and make Doublestar, ranked 30th in the global market, the largest shareholder of Kumho Tire.

“A deal with Doublestar is deemed to be the most reasonable choice when it comes to quick normalization of management at Kumho Tire as well as its Chinese unit and minimalizing creditors’ loss,” the statement read. “We decided to proceed with the negotiation with Doublestar after seeing the potential of the vision it came up with and management plans.”

Under the proposed terms, Doublestar will make a down payment of 32.3 billion won, about 5 percent of the entire investment, and inject an additional 200 billion won in fresh capital for new facilities. It will have to guarantee employment for Kumho Tire workers for three years amid fears of massive layoffs and leakage of Korea’s advanced tire technologies to a foreign company.

Doublestar will be banned from selling its stake in Kumho Tire for the next three years. Creditors will have to hold onto their share for five, but they will be allowed to sell 50 percent of their stake each year when four years passes after the sale.

Doublestar, though, will be required to maintain its status as the top shareholder in Kumho Tire until five years after the acquisition or when creditors have sold off their entire stake in the tiremaker, whichever comes first.

The deal is set to be done by the first half of the year, and the terms will require approval from the Korean government.

Korea Development Bank (KDB) said in a news conference Friday that its assessment of Kumho Tire’s real value was 460 billion won, well below the 1.3 trillion won in debt that the company holds. Kumho Tire will need an injection of external funding to sustain its operation, KDB Vice President Lee Dae-hyun said, adding that a debt workout program and court receivership were implausible options, given the bleak prospects of Kumho’s China operation.

Kumho Tire was on the brink of court receivership until Wednesday, when its labor union and management met to discuss a turnaround plan proposed by creditors.

The talks did not produce any results, and after Friday’s announcement of the possible sale, the union threatened to strike.

Doublestar had attempted to buy Kumho Tire last year, but creditors called off the deal in September after the Chinese company asked for a lower bid price. Doublestar had signed a contract in March to acquire 42.01 percent of Kumho Tire for 955 billion won.

The company then demanded creditors lower the price to 800 billion won.