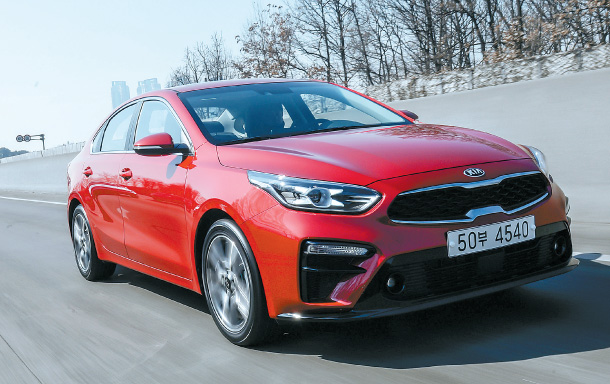 The second generation of Kia Motors’ K3 compact sedan on a test drive between Gimpo and Yangpyeong in Gyeonggi on Tuesday. [KIA MOTORS]

YANGPYEONG, Gyeonggi - The new K3 offers a lot of bang for its buck, coming in at a lower price and with ramped-up smart technology.

The second generation of Kia Motors’ compact sedan comes six years after the first and is suitable for price-sensitive drivers who just need a reliable vehicle to get from place to place. According to the company, there have been 6,000 preorders as of Feb. 26, two weeks after Kia started taking reservations.

The Korea JoongAng Daily got behind the wheel of a gasoline-fueled K3 on Tuesday for a test drive between Gimpo and Yangpyeong in Gyeonggi. From the course, nothing was more apparent than the car’s impressive fuel efficiency.

Kia said such records were possible because of a new powertrain called SmartStream, a 1.6-liter petrol engine that the automaker developed with intelligent variable transmissions.

For price-conscious buyers who might be reluctant to add options, Kia has made indulging in smart-car luxuries guilt-free.

All trims of the K3 come with a forward collision avoidance feature, which the automaker found to be the most popular smart-car technology among consumers, at no additional cost.

Kia has also lowered the price of its Drive Wise Package, which includes premium smart technologies like lane keeping assist and a driver warning system, from 850,000 won to 650,000 won.

In terms of driving, the K3 ran smoothly as expected from its petrol engine. Even on a winding course, the car was able to run stably at speeds of over 100 kilometers per hour. The vehicle easily accelerated to 120 kilometers per hour but slowed afterward.

While the K3 has much to offer in smart technology, the tradeoff on cost is apparent in the interior. The car does not come with a wide navigational display that is commonly spotted on the dashboard other Kia models.

And without a head-up display behind the steering wheel, this reporter had to occasionally take her eyes off the road, making for a cumbersome drive at times.

Seat adjustment on the passenger side has to be done manually by pulling a lever instead of pushing a button. The driver’s seat, though, has a button for seat adjustment.

The second-generation K3 is bigger in size, the length extended by 80 millimeters (3.15 inches) and width by 20 millimeters. The trunk is able to handle 502 liters of luggage.

With the new fuel-efficient engine, the car’s performance is modest. Maximum output is 123 horsepower, while the previous generation boasted 132 horsepower. The maximum torque has gone down from 16.4 to 15.7 kg-m in the latest model.

Kia Motors, Korea’s second-largest automaker by sales, plans to launch the car globally in the second half of this year and sell 300,000 of them worldwide next year.

The model comes in four trims starting at 15.9 million won.