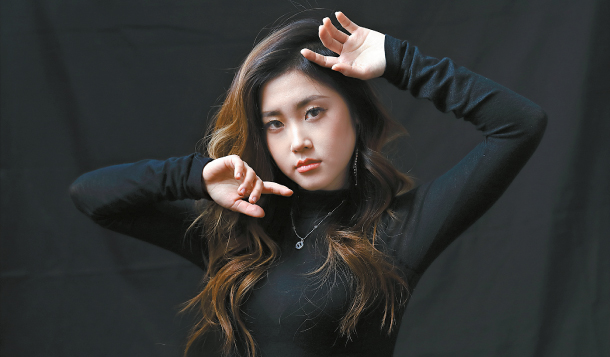 Jeong He-yoon is a 22-year-old choreographer and a member of a 14-member pop group known as Now United, set to debut in April, which was formed by the English producer, creator of “American Idol” and manager of the Spice Girls and Amy Winehouse, Simon Fuller.

The members of the group have an average age of 17.5 and come from 14 countries, including Korea, United Kingdom, Mexico, Germany, Japan and Senegal. Jeong was selected as a contender for the group last year, after Fuller’s London-headquartered company, XIX Entertainment, took notice of her dancing video on the internet.

After that, XIX contacted a Korean agency to include Jeong as a possible member.

Last July, four nominees from each of the 14 countries gathered in Los Angeles, and some 50 trainees went through a week-long audition.

Braving fierce competition, Jeong was selected as the Korean member of Now United. Her greatest strengths include her confidence and her dancing skills. She also inherited talent in singing from her mother, a former opera singer.

Jeong He-yoon, fourth from left, poses with the other 13 members of Now United. [NOW UNITED]

When she was a high school student in Daejeon, Jeong spent more time in the dancing studio than in school. After graduation, she came to Seoul by herself, without the support of her parents, to attend a dance academy. Her parents thought she would soon give up and return home.

“I started ballet when I was 5 years old and started street dancing when I entered middle school,” says Jeong. “Rather than ballet, with its rigid rules, I was attracted to street dancing for its freestyle charm.” She says, “My parents were shocked when I told them that I would not attend university to focus on dancing and singing. After I moved to Seoul, my daily life was doing two part-time jobs at cafes and restaurants, and then dancing all night, sleeping only two hours. It was tiring, but I had my dream so I stayed strong.”

During her time as a dancer in Seoul, she uploaded videos of her choreography on social media, including YouTube, earning global recognition and opportunities to participate in global dance competitions and lectures.

Her English skills, developed during her time in the United States as a first and second grader, also helped.

“I thought I was alone when I was in my teens and couldn’t fit in well with my peers,” says Jeong. “That was difficult, but I was really glad that, through dance, I met many unique international friends who respected me as I am. When I dance, I am myself, no matter what.”

That is why Jeong turned down an offer by a Korean entertainment company to debut by joining a girl group, which usually has a clear-set concept with little room for flexibility.

She says, “I had faith that I will have an opportunity that fits me better later.”

Jeong, the oldest member of the group, invited the German member of Now United, Sina Deinert, to Korea last December and guided her around Seoul during her stay. They later uploaded a dance video on social media.

Even after she became a member of Now United, she still spent eight hours a day practicing.

She said there weren’t any problems getting along with other members. “We accepted our differences and that helped us get closer,” she says. “That attitude helped us freely express our different colors.”

Jeong adds, “We are having a global promotion tour right after our debut. It is really exciting to travel to 14 countries and perform. It’s my responsibility to make the best of any circumstance. I want to become an artist who keeps improving. I also want to compose songs and write lyrics. Don’t you think I’ll have unlimited possibilities on my path ahead?”