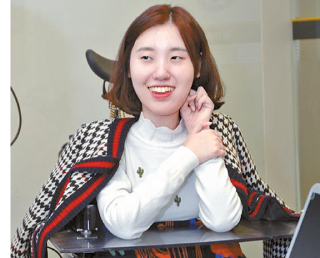 Kwak Hee-jin, 24, seated on an electric wheelchair, said she gets breathless in less than a minute when she speaks. But she was all smiles during her interview at Gangnam Severance Hospital on Feb. 27.

She was visiting the hospital in southern Seoul to celebrate the college graduation of patients suffering rare neuromuscular disorders. The event is titled, “Congratulations, Korea’s Stephen Hawking!” Despite her physical pain, she was full of excitement because she just started out a new career as a web designer.

With a bachelor’s degree in design from Chonnam National University, she was hired in December as a web designer for an online dog supplies store called “Meongmeong dotcom.” She works from home.

“The company is considerate of my situation,” she said. “I want to be really good at my job.”

But behind her confidence lies the past years of struggle.

When she was relatively late in crawling, sitting and standing up as a baby, her mother brought her to a local state-run health center. The doctors there told her to go to a bigger hospital.

Her mother, Oh Eun-i, 49, initially thought Kwak had a problem with her bones. But it turned out to be a rare neuromuscular disease. Confirming the illness when Kwak was six, her doctor told the mother that those suffering from the disease usually die before the age of 10. Weakened muscular movement tends to interfere with breathing, eventually becoming the cause of death.

But a respiration rehabilitation program was launched in Korea in 2000, and a special center devoted to the program was established at Gangnam Severance Hospital in 2008, with support from a social contribution foundation formed by life insurance companies. Thanks to this support, the number of those dying from respiratory failure began to dwindle.

Kwak has been going through a lengthy period of rehabilitation. She took physical therapy twice a week at a hospital near her house in Yeosu, South Jeolla, and spent time in Seoul every vacation to have the muscles in her arms, legs and hands strengthened through training sessions.

When she was in the second grade in middle school, she underwent surgery to straighten her spine, which would bend as her muscles could not support the bones. Later, she joined the respiratory rehabilitation program at Gangnam Severance Hospital.

Even though she has gotten much better than before, it is still hard for her to cough voluntarily. Instead, she removes phlegm using a cough inducer.

“If I don’t practice regularly, the quantity of breath goes down,” she said. “I tend to speak in a small voice but am out of breath even when I talk for a short period of time.”

She spent half her elementary school days at the hospital because whenever she caught a cold, it easily turned into pneumonia. It was hard to keep up with the school curricula, but she maintained high marks thanks to her mom.

Oh carried her daughter on her back every day to class, telling her to make friends rather than study.

Kwak wanted to get into college and study painting, which she had liked ever since she was a child. But her grip was too weak to hold a brush and the range of her hand movement was limited, so she went into design instead, as that did not include drawing at part of its entrance examination. Being able to commute from home was also an added benefit of her school.

It took her hours to complete school assignments that other students would have finished in 10 minutes. But she persisted. As a result, she was awarded a presidential prize for superior grades when graduating from the university on Feb. 26, five years after entrance.

Having taken her first career step as a designer, Kwak now wants to take on more challenges, such as taking a trip or trying her hand at some other things she has never done.