Moon will send envoy to North

Moon will send envoy to North 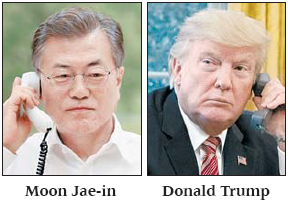 President Moon Jae-in will send a special envoy to North Korea possibly this month to discuss an inter-Korean summit and to confirm its leader Kim Jong-un’s desire for North-U.S. dialogue, senior officials at the Blue House said Friday.

Moon revealed the plan to send an envoy to Pyongyang when he spoke on the phone with U.S. President Donald Trump on Thursday, according to the Blue House. The call started at 10 p.m. and lasted for 30 minutes.

Moon and Trump discussed the outcomes of the visits by the North Korean envoy and senior delegates on the sidelines of the Olympics, Yoon said. “The two leaders agreed to keep the momentum of the inter-Korean dialogue and continue their efforts to lead it to denuclearization of the Korean Peninsula.”

Moon informed Trump that he will soon send a special envoy to the North to confirm what was discussed during the North Koreans’ visits, Yoon added.

Last month, North Korean leader Kim Jong-un sent his younger sister, Kim Yo-jong, as a special envoy to the South and invited Moon for an inter-Korean summit in the North. A second delegation, led by Kim Yong-chol, also came and Kim repeatedly stress that the North is open to dialogue with the United States.

According to Yoon, the South Korean envoy will be sent as a reply to Kim Yo-jong’s visit.

The two leaders also agreed to continue their close consultation on the upcoming progress of the inter-Korean talks, Yoon said. Their last phone talk was on Feb. 2.

“President Trump and President Moon noted their firm position that any dialogue with North Korea must be conducted with the explicit and unwavering goal of complete, verifiable, and irreversible denuclearization. The two leaders committed to maintain close coordination.”

It is the first time that the White House used the term, “complete, verifiable, and irreversible denuclearization,” in a statement on Trump’s phone talk with Moon. Since Moon took office in May last year, the two leaders had 11 phone calls and Washington made clear on Thursday that its precondition for sitting down with Pyongyang is the Kim regime’s willingness to give up nuclear arms programs.

Conspicuously missing in the White House readout was Moon’s plan to send a special envoy to the North.

Speculations in Seoul grew on Friday about who would be Moon’s special envoy and when he or she will travel to the North.

“The North knows that we are sending a special envoy,” a senior Blue House official said. “I believe it was discussed roughly last time [during Kim Yong-chol’s visit].”

When Kim visited the South to attend the closing ceremony of the Winter Olympics, Moon met with him on Feb. 25 and pushed for a North-U.S. dialogue and a roadmap for the North’s denuclearization. “We have to listen to what the North wants to say,” the official said. “There are things we want to confirm, such as the improvement of the inter-Korean relations and the North-U.S. talks. By sending the envoy, we can see how strong the North’s intentions are.”

Because the Blue House said the special envoy will make a trip as a reply to the North Korean envoy Kim Yo-jong’s visit, Moon is expected to send one of the four top officials who had met with her during her stay.

The high-level North Korean delegation for the opening ceremony of the Olympics was led by Kim Yong-nam, the country’s nominal head. In addition to the North Korean leader’s sister, Ri Son-gwon, chairman of the Committee of the Peaceful Reunification of Korea and other officials were on the delegation.

In the two previous inter-Korean summits in 2000 and 2007, special envoys to the North were top officials with influence on North Korea affairs who had experiences in contacting Pyongyang officials. During the Kim Dae-jung administration, Park Jie-won, then culture minister, and Lim Dong-won, then NIS director, were dispatched as special envoys to arrange the historic summit.

During the Roh administration, then Unification Minister Chung Dong-young and then NIS chief Kim Man-bok served as special envoys to negotiate the 2007 summit.

There is also speculation that the Blue House will announce its special envoy as early as this weekend, and dispatch him or her next week. “The president wants to send the envoy as soon as possible,” a key presidential aide said. The PyeongChang Winter Paralympics take place from March 9 to 18, and the South-U.S. joint military exercises have been delayed until after its closing. Moon is also expected to have an overseas trip at the end of this month.

Meanwhile, the conservative opposition parties said Friday that it is unacceptable for Suh to be sent as the special envoy. “It is inappropriate for the NIS to arrange an inter-Korean summit,” said Rep. Choung Tae-ok, spokesman of the Liberty Korea Party. “The NIS is supposed to catch spies, but there has been a wrong practice from the past that the NIS had arranged inter-Korean talks. The government must not commit the same error and allow the Unification and Foreign Ministries to oversee the process.”

Rep. Ha Tae-keung of the Bareun Party also said it is necessary for Seoul to send an envoy to Pyongyang, but that Suh is unfit to serve the job.

“The NIS director is in charge of the mission to change the North Korean regime and secret operations against the North,” Ha said. “The people’s dignity will be hurt greatly if he will meet Kim Jong-un and bow his head.”